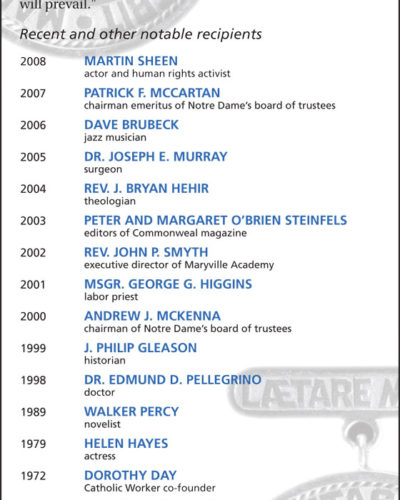 WASHINGTON – The University of Notre Dame announced April 30 it will not award its prestigious Laetare Medal during the May 17 commencement ceremony after Mary Ann Glendon, former U.S. ambassador to the Vatican, turned down the honor.

Glendon cited growing controversy over President Barack Obama’s presence at this year’s event as the reason for her rejection of the award.

Instead, the Catholic university announced that its 1984 recipient of the medal – Judge John T. Noonan Jr. – will deliver an address during the school’s 164th commencement ceremony.

This year will mark the first time the Indiana university has failed to bestow the Laetare Medal – presented to an American Catholic for outstanding service to the Catholic Church and society – since it was established in 1883, said Dennis Brown, a spokesman for Notre Dame.

Glendon told Holy Cross Father John I. Jenkins, Notre Dame’s president, in an April 27 letter that she had changed her mind and decided not to participate in this year’s graduation ceremony because of the university’s decision to give Obama, the scheduled commencement speaker, an honorary degree.

She described Obama – who was a student at Harvard Law School in Cambridge, Mass., while she was a professor at the school – as “a prominent and uncompromising opponent of the church’s position on issues involving fundamental principles of justice” and said the decision to present him with an honorary degree violated the U.S. bishops’ 2004 request that Catholic institutions not honor “those who act in defiance of our fundamental moral principles.”

Obama supports legal abortion and his administration recently proposed new regulations that would expand the use of federal funds for embryonic stem-cell research. Both are in direct conflict with church teaching.

“In thinking about who could bring a compelling voice, a passion for dialogue, great intellectual stature and a deep commitment to Catholic values to the speaking role of the Laetare medalist – especially in these unusual circumstances – it quickly became clear that an ideal choice is Judge Noonan,” Father Jenkins said in a statement posted on the university’s Web site April 30.

“Since Judge Noonan is a previous winner of the Laetare Medal, we have decided, upon reflection, to not award the medal this year,” he added.

A former professor at Notre Dame, Noonan was appointed to the U.S. Court of Appeals for the 9th Circuit in 1985 by President Ronald Reagan and has been a consultant for the Presidential Commission on Population, the National Institutes of Health, the National Endowment for the Humanities, the Ford Foundation, the Rockefeller Foundation and the American Law Institute, and served on the Eisenhower administration’s National Security Council.

He is the author of numerous books, including “A Church That Can and Cannot Change: The Development of Catholic Moral Teaching,” “Contraception: A History of Its Treatment by Catholic Theologians and Canonists” and “Power to Dissolve: Lawyers and Marriages in the Courts of the Roman Curia.”

Since Noonan has served as a consultant for several agencies in the Catholic Church, including Pope Paul VI’s Commission on Problems of the Family and several U.S. bishops’ committees, Father Jenkins said he would send Notre Dame graduates “into the world with sound advice and affirmation.”

Since announcing March 20 that Obama would speak at the commencement, the university has been criticized by some U.S. bishops, including Fort Wayne-South Bend Bishop John M. D’Arcy, leader of the diocese where Notre Dame is located, who announced plans to boycott the event.

Other clergy, alumni and conservative Catholic organizations have mounted a campaign seeking to have the university revoke the president’s invitation.

Anti-abortion activist Randall Terry has vowed to protest Obama’s scheduled address every day leading up to the May 17 ceremony and has suggested that protesters may disrupt the commencement.

Published reports said Bishop D’Arcy refused to meet with Terry April 29 to discuss the upcoming event. A spokesman for Bishop D’Arcy was unavailable April 30 to comment on those reports.

Though some Notre Dame students have participated in campus protests about Obama’s scheduled appearance, others have voiced their enthusiasm and support of the president’s upcoming commencement address.