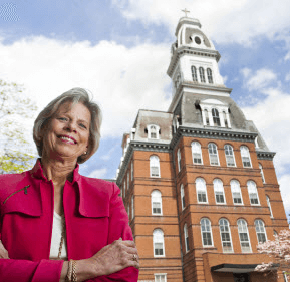 “My faith has always been important to me,” said Seurkamp, president of Notre Dame of Maryland University. “It’s about being willing to take risks while trusting in one’s abilities and skills to make things happen, and trusting in God’s presence to make it happen.”

Seurkamp, 65, the first permanent lay president in the Baltimore institution’s 116-year history, announced in May 2011 her retirement. She will conclude her 15-year tenure June 30.

Married, with three children and four grandchildren, Seurkamp plans to spend her newfound free time as a higher education consultant, playing the piano and tennis, reading, horseback riding and attending the theater.

During her tenure, the institution became a university; established a school of pharmacy; a Ph.D. program in education and the college of adult undergraduate studies; and expanded and renovated campus facilities.

Earlier this year, Seurkamp was named one of The Daily Record’s 2012 Influential Marylanders, an annual award given to five people in 10 categories, including education.

Tom Linthicum, executive editor and vice president of The Daily Record, said Serukamp was selected because 2011 was a “landmark year” for the institution, in part because it became a university.

“It was also what I would call an overall achievement award,” Linthicum said. “She’s been there 15 years and she’s really led the institution through a great deal of progress, including creating the pharmacy school. And, because of her retirement, we wanted to recognize her while she was still there.”

Seurkamp called the recognition “a great honor” and said it draws attention to the university.

School Sister of Notre Dame Kathleen Feeley, who served as Notre Dame president for 21 years and is its writer-in-residence, said Seurkamp has led fundraising campaigns and “raised the stature of the college to new heights, not only by it being named the university, but all that lies behind it.”

Sister Kathleen said that because Seurkamp has kept in mind the school’s mission – to educate women as leaders to transform the world – she “was always looking for new ways to educate, to respond to new needs.”

School Sister of Notre Dame Kathleen Cornell, the order’s provincial leader, said Seurkamp has worked to “develop the major donors for our institution,” allowing for new construction and building renovations.

“You don’t do that totally through tuition,” Sister Kathleen said. “To make it work you also have to find the funds.”

Theresa Wiseman, the school’s former media relations director, called the establishment of the university’s school of pharmacy “a brilliant move.”

“It brought Notre Dame to the attention of a lot of people who may not have heard about the institution,” Wiseman said.

Seurkamp is leaving Notre Dame “a very strong institution that will continue to grow,” Wiseman said.

“She’s always thinking about Notre Dame and what’s best for Notre Dame and how to help the college succeed. It’s hard to separate her from someone who’s not a president.”

Pat Bosse, the university’s vice president for advancement and marketing, said Seurkamp’s leadership has influenced the state, region and nation.

“She’s recognized as a very strong and influential leader,” Bosse said, “someone who is able to influence policy and decisions, who’s sought after for her expertise and her skills.”

“The wonderful thing about Mary Pat is that she is a collaborative leader,” Bosse continued. “It’s never been about her. It’s been about the mission and what is right for the institution. My hope is we continue to be thoughtful in our vision and entrepreneurial spirit and meeting society’s needs.”

On Feb. 23 the university announced Seurkamp’s successor, Dr. James F. Conneely, who will be the first male to serve as president of Notre Dame. He starts July 1.

Patricia J. Mitchell, chairwoman of the university’s board of trustees, said Conneely should focus on “staying true to the mission, but also take a page from Mary Pat’s book – trust and dare to push us on to the next level of achievement of excellence.”

“I think,” Seurkamp said, “that Notre Dame has a great future.”