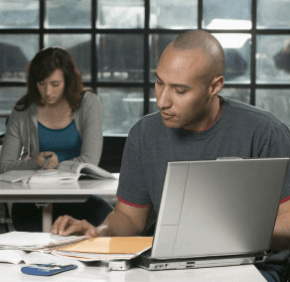 By Jessica Marsala
jmarsala@CatholicReview.org
What course of study to choose as a college major?
The question that millions of young adults and parents ask themselves year after year still has no clear answer.
“There are majors certainly that seem to do a little bit better than others, but I want to emphasize that I don’t think anything (a job) is guaranteed,” said Clare Tauriello, the director of the career center at Mount St. Mary’s University in Emmitsburg.
Tauriello cited business; computer science; health or science-related programs; teaching and accounting, among majors with good track records, but suggested that nothing is as important as discovering one’s passions and interests.
She noted that a student’s four-year “journey” – including internships, resumes and job interviews, on top of academics – is so vital that Mount students learn how to make a resume on the first day of their freshman year.
Ninety-four percent of Mount graduates are employed in full- or part-time positions a year after graduation.
Passion is also what leads many graduates of Loyola University Maryland to spend a year “giving back to the community” in service rather than looking for employment, according to Jennifer Rowley, the associate director of employer relations at the university’s career center.
In addition, approximately one-quarter of Loyola graduates immediately begin pursuit of a higher degree.
Of those trying to secure a job, “roughly 79 percent of the graduates (were) employed either full-time or part-time” and only 3.3 percent of students surveyed were still seeking employment, according to Loyola’s 2012 Follow-Up Survey. According to the career center’s website, the survey is completed by phone and/or email six to nine months after graduation.
Rowley attributes such a high rate of success to the Loyola Core Curriculum which, among other things, gives students the crucial ability to articulate and present their thoughts, a skill that Tauriello agreed is not restricted to a particular job or career.
“Everybody needs a writer,” Tauriello said. “Employers want to know that you can write, that’s an extremely important skill.”
Many students at Catholic universities also benefited from the role their faith can play in the career and major counseling process. Tauriello mentioned how she has found prayer useful for students who are “in pain” because they do not know what the future holds.
“Sometimes it’s good to stop and pray and (acknowledge) that God has them in his hand and that those answers will come as we go forward,” Tauriello said, while also mentioning how she tries to offer students a “supportive, open atmosphere.”
Similarly, Diane MacKenzie, Ph.D, director of the academic and career enrichment center at Baltimore’s Notre Dame of Maryland University as well as a licensed clinical professional counselor, said that the university tries to help students find their “vocational calling.”
Like her peers, MacKenzie stressed how difficult it is to isolate a particular major or program of study as better to pursue than others.
“All of our programs prepare our students for jobs,” MacKenzie said, while acknowledging that it could take longer for liberal arts students to secure paid employment than for students of other programs.
Regardless of what is on one’s diploma, there are certain intangibles an employer is looking for.
“Every recruiter is looking for somebody with enthusiasm,” the Mount’s Tauriello said. “If they’re not bringing that enthusiasm it doesn’t matter how narrow that major is. If they are not bringing some love for that a recruiter is not gonna like that, they’re not going to be as interested in a student.”
Also see:
Pope: Too many Christians have luke-warm hope, watered down faith in God
Young professionals groups tap into neglected demographic
PrevNext