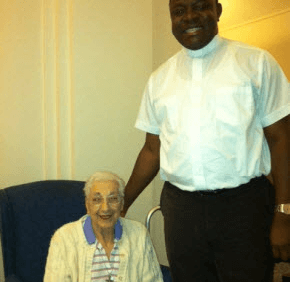 By Jennifer Williams
jwilliams@catholicreview.org
Father Godswill Agbagwa is very much aware of the importance of a mother.
The priest from Nigeria, who serves as chaplain of Catholic Charities’ Jenkins Senior Living Community in Baltimore, spoke of the love and respect he has for his own mother, the late Evelyn Peters Chinyere Agbagwa, who died Oct. 28, 2012.
As he sat in his simply furnished office, wearing a crisp white shirt and dark slacks, Father Agbagwa spoke of how, after the death of his father in 1990, his mother transitioned from a housewife to “the sole breadwinner of a family of eight.”
She launched a small-scale business selling palm oil and traveled to neighboring states in their homeland to sell the product.
“She did it for over 13 years,” Father Godswill said, noting that as a widow in Nigeria, his mother had no pension and no social security. “She was very industrious and very hard working, very committed. It was a strenuous business because it involved traveling every week and much lifting.”
It was his mother who inspired him to become a priest. When Father Agbagwa was about 7 years old, his mother, whom he describes as very religious and pious, took him with her to Sunday Mass and when she did work with organizations such as the St. Jude Society.
“That initial introduction into the faith was enough to inspire me to become an altar server and then a priest,” Father Agbagwa said.
Family history has it that the priest’s father’s father (whom he never met), predicted the third child born to the family would be a son and would become a priest. So when Father Agbagwa was born, his father named him Godswill.
The bishops in Nigeria told Father Agbagwa and his fellow priests that they may have to serve as priests for the rest of the world.
He moved to the United States in 2006 and is looking to finish his Ph.D. in moral theology and ethics from the Catholic University of America in Washington, D.C. in 2013.
At Jenkins, the senior residents are well-acquainted with the mild-mannered priest.
“Father, are you coming to hear confessions,” a group of women residents called to him as he walked down the hallway on a recent afternoon.
“Back in Africa, we are used to living together with older people,” said Father Agbagwa, who lived with an elderly uncle and his grandmother. “I took great joy in helping them, so I love to be in their midst. I do respect them a lot because they built society up for us and because they are old does not mean we should not respect them. We wouldn’t have what we have today without them.”
“This place provides the support that ordinary people wouldn’t get,” he said, noting he celebrates Mass every day but Wednesday, administers the sacraments, anoints the elderly residents and listens to them.
“I try to bring the word of God to their own situation,” he said.
Joan Sibley, director of Elder Life at The Neighborhoods at St. Elizabeth, described Father Agbagwa as a constant presence of comfort for the elders on the Jenkins campus.
“We are blessed to have a spiritual shepherd for the Jenkins community,” she said. “He is available in times of crisis as well as in quiet moments of the day to share his time with the elders.”
Father Agbagwa said visiting residents and encouraging them is important, as they have a lot of concerns.
“They are so happy whenever a priest comes around,” he said, noting that he loves the work he does and is very happy in his ministry in the community.
He said that as a nation and community, we have to remember to be thankful for and appreciate our elders.
As he reflected on his mother and the challenging situation she faced as a single parent in a country he said is filled with corruption, Father Agbagwa said his dream would be to find a way to stop the corruption. He said the government and the church should help make things easier for women, who have limited rights.
Copyright (c) May 12, 2013 CatholicReview.org
PrevNext