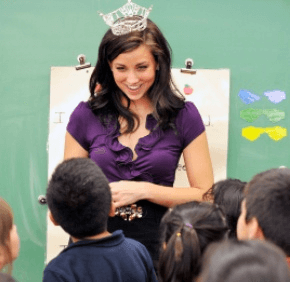 MILWAUKEE – All smiles, Susan Kaeppeler, fourth-grade teacher at Kenosha’s St. Joseph Academy’s lower campus, was greeted with the red-carpet treatment when she arrived to class Jan. 16 after a whirlwind weekend where she saw her oldest daughter, Laura, crowned Miss America.

“Some of the parents decorated her classroom, and made some posters and put them up in the gym as the school day began,” Pauline McTernan, St. Joseph development director, said in a telephone interview with the Catholic Herald, newspaper of the Milwaukee Archdiocese.

“We rolled out a red carpet, presented her with a crown, bouquet of flowers, and balloons and led her to the gym as the school day began. The teachers all wore T-shirts that said, ‘I teach with Miss America’s Mom.’ It was so exciting!”

Particularly touching to McTernan was Susan’s impromptu speech as she reminded students what her daughter had said to them when she visited the school last October, as Miss Wisconsin, a title she won last June.

“She asked if the students remembered Laura’s message and no matter who she pointed to, the kids remembered what Laura had said to them,” she said. “I will never forget it either, as it knocked my socks off. She told the students to put God first, to believe in yourself and to never give up. And the students got it; it just shows what type of girl Laura is. Her whole family is wonderful and has strong convictions and good character.”

Three days after the win, Susan, in a telephone interview with the Catholic Herald, said it hadn’t sunk in yet. Explaining that her daughter entered the pageant only hoping to make it to the top 10, she said, “I still don’t think it has really sunk in that she has won, even after a couple of days already. I wake up in the morning and say, ‘Boy, did that really happen?’ It was kind of a surreal moment and it still seems unbelievable.”

She and Laura were extremely nervous the day before the pageant, admitted Susan, but she said on the day of the competition, a sense of calm came over them as they knew the result was in God’s hands.

“We just felt him taking over and had a sense of peace about it,” said Susan, a member of St. Therese Parish, Kenosha.

That night, too, Susan said God’s presence was felt.

“Interestingly, before the five girls who were the last contestants went on stage, they gathered in a circle and prayed together,” said Susan. “They all agreed that whoever God thought should be continuing on this journey would be the one selected and they would all be so excited, love and support the winner. There was no sense of upset or anything when the others didn’t win; it was all very cohesive, and they were so supportive of Laura. It was a great experience.”

Following the crowning, a winner’s reception was held in a private suite with Miss America directors, pageant officials, friends and family. However, just an hour of private time was allowed after the pageant, and Laura was whisked to New York where she has been making the talk show circuit.

An official Wisconsin homecoming will be scheduled within the next four to eight weeks.

As Miss America, Laura will spend the next year touring the country to speak to a variety of groups and raise money for the Children’s Miracle Network, the Miss America Organization’s official charity. She won a $50,000 college scholarship and an additional $2,000 scholarship for her opera performance of “Il Bacio” during the talent portion of the competition.

She holds a bachelor of arts degree in music and vocal performance from Carthage College, Kenosha. She told pageant officials that she intends to use the scholarship money to pursue a law degree and become a family attorney who specializes in helping children of incarcerated adults.

As Miss Wisconsin, Laura’s platform issue was mentoring children of incarcerated parents. She developed a program in Kenosha called Circles of Support, aimed at children of all ages to encourage positive decision-making and help strengthen the child’s self-esteem.

“Having a parent incarcerated is an experience I can relate to,” Laura said in an interview when she visited St. Joseph Academy last October. Her father was sentenced to a year in federal prison for a white-collar crime when she was a teenager.

Citing research that indicates children whose parents are incarcerated are six times more likely than other children to commit crimes, Laura said her hope is that mentoring can help end the cycle of crime, she said.

“My Catholic education has been so important in reaching my goals. It gave me my foundation for my faith,” she said in an interview. “I praise God in how he’s rewarded me.”

She said she saw her journey as Miss Wisconsin, which led to her new crown, as “a way to give back.”

Contributing to this story was Maryann Bouche in Kenosha.