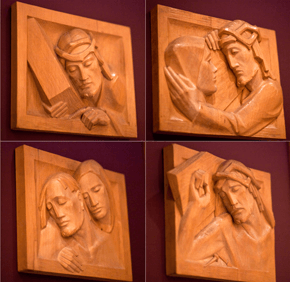 The carvings are small and square, 10-by-12-inch windows to the face of Christ and his companions on the procession to Calvary. In one, Jesus’ face is less than three inches from his mother’s, conveying a true intimacy between the two. In another, Jesus and Simon both press their cheek to the cross. The carvings are compelling works of art, but for parishioners at St. John the Evangelist in Columbia, they’re also new tools for contemplating Christ’s passion.

St. John the Evangelist installed its new Stations of the Cross on Ash Wednesday – the first permanent Stations the parish has had since it began in 1967. They’re part of the parish’s efforts to add suitable imagery to a formerly sparse space.

When it formed, St. John the Evangelist joined with other Christian and Jewish faith communities to share an interfaith worship center with generic décor that fit a prominent trend in that era’s Catholic church design. Today, the parish worships on two interdenominational campuses – at the Interfaith Center Wilde Lake and Oakland Mills Interfaith Center. St. John the Evangelist is one of only two congregations using the Wilde Lake campus for regular weekend worship, and it has dedicated one room to Catholic liturgies, where the Stations now ring the walls.

When St. John the Evangelist pastor Father Gerard Bowen started seeking new Stations, he wanted to find art that fit with the space’s aesthetic – simple and modern. The painted, pastel-hued Stations the parish had previously displayed during Lent seemed out of place, and will be donated to a new parish in Haiti, he said.

The modern Stations found their way to Father Bowen after the Sisters of the Good Shepherd closed a chapel that had formerly served the Halethorpe-based community’s contemplative sisters and distributed its sacred art. Carved from pale basswood and designed in the mid-sixties in Italy, the Stations were unexpectedly a near perfect match for another sacred art piece parishioners had recently donated – a corpus for the wooden cross that hangs above the altar.

“There’s a religious image almost everywhere you look, whereas before there was just brick,” he said of the chapel now.

Father Bowen expects the Stations and the crucifix to aid worshipers’ contemplation. Already, parishioners appreciate the change, he said.

Father Bowen has seen Catholics’ attitudes on devotional art shift since the decade after the Second Vatican Council, when design emphasized the worshipping community with simple imagery instead of the revival architectural styles and abundance of paintings, statues and stained glass many Catholics of the time had grown up with.

Today, Catholics want devotional objects in their churches, he said.

“Over the course of the years, the congregations found a hunger, a need for some additional ornamentation. It’s almost like the pendulum swung the other way,” he said.

“If we grew up in a church that was chockablock with holy images … to then pull back and focus on the essentials worked very well because people already had grown up with the other ornamentation. But then, as the years went by and we became more of a secular society, and people discovered a greater need for the spiritual in their lives, then we found a reemergence of traditional ornamentation of the church and some of the traditional devotions,” he said.

Father Bowen has other plans for the space, including statues of Mary and St. Joseph.

“All good art, I believe, attempts to create a spiritual dialogue between the viewer and the creation of art itself, whatever was in the mind of the artist,” he said.