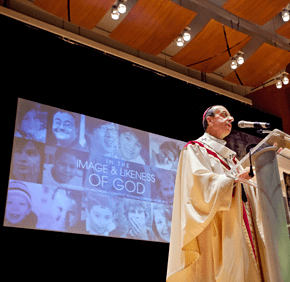 “He has united us in working with him,” said Curry, a teacher for 20 years at Archbishop Spalding High School in Severn who noted that the convocation “is refreshing. It reminds me of my vocation.”

Curry was one of more than 1,200 Catholic educators who attended the Aug. 20 convocation at the Joseph Meyerhoff Symphony Hall in Baltimore.

This year’s theme was “In the Image and Likeness of God.”

In his homily during the opening Mass, Archbishop Lori announced his “strong support” for Catholic education.

“Our unity, our sense of being coworkers in the Lord is so important to the credibility of our mission and the credibility of the Gospel,” said Archbishop Lori, who added that “Catholic schools are very much at the heart of the mission” of the archdiocese.

Baltimore Bishop Denis J. Madden; Monsignor Richard W. Woy, vicar general and moderator of the curia for the archdiocese; and Paulist Father John E. Hurley, executive director of the Department of Evangelization, concelebrated during the Mass.

In her opening remarks, Dr. Barbara McGraw Edmondson, superintendent of Catholic schools, said one reason parents send their children to Catholic schools is because of “high standards” and “because we educate all kinds of minds.”

“There are students with special needs who are underserved,” Edmondson said. “Let’s aim higher.”

Eleven teaching excellence awards were announced and the Doris Musil Award, the highest education honor given in the archdiocese, was presented to Sheila Postlethwaite, English department chairwoman at Archbishop Spalding High School.

Zachary Gabriel, a fifth-grader at St. Pius X School in Baltimore, said “St. Pius has taught me the values of my Catholic faith. Kindness is probably the number one value that is stressed at my school.”

Caroline Bodley, an incoming freshman at The Seton Keough High School in Baltimore who has Down syndrome, said “since attending Catholic school, I know God loves me and I am happy he made me special.”

Bodley added that “I know kids with different abilities would benefit by attending Catholic school like I have.”

Leonard Jacques, a senior at Baltimore’s Archbishop Curley High School, said “my Catholic education has taught me to put God first in everything I do.”

“I am blessed to have been given a Catholic education because now I know more about my faith,” Jacques said.

Oliver, who called Archbishop Lori the school leader, said “the fact that he’s out in front means a lot to Catholic educators.”

The keynote speaker was David A. Sousa, an international consultant in educational neuroscience and author. He was to speak during the convocation’s afternoon session.

27,962 students were enrolled in archdiocesan Catholic schools during the 2011-2012 school year

17,215 students were enrolled in 50 elementary and middle schools

In addition, 42 students were enrolled in pre-Kindergarten programs and 119 students attended a special education school

The archdiocese expects to have final enrollment numbers for the 2012-13 school year in October.