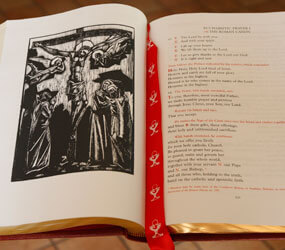 WASHINGTON – Cardinal Donald W. Wuerl doesn’t have a problem with the fact that there will be some missteps and some wrong words spoken during the first weeks of using the new English translation of the Roman Missal at Mass.

“We are going to have to live with the fact that not every celebration is going to be perfect,” the archbishop of Washington said during a Dec. 6 teleconference. “But that can be inviting to some people who are afraid they are going to do the wrong thing. They might say, ‘That’s the same struggle I’m having.’“

Cardinal Wuerl, who co-wrote “The Mass: The Glory, the Mystery, the Tradition” with Mike Aquilina, joined in a panel discussion about the impact of the new translation, which went into use in the United States on the first Sunday of Advent, Nov. 27.

As 2011 drew to a close, American Catholics were greeting the new missal translation with a mostly positive response and finding some unexpected spiritual benefits in the need to pay closer attention to the words spoken at Mass – at least for a while.

Father Dan Barron, an Oblate of the Virgin Mary who is director of spiritual formation at John Paul the Great Catholic University in San Diego and editor of Magnifikid!, a weekly worship aid for children, said he has been “amazed to see that 18-, 19-year-old students are talking about the liturgy.”

“What brilliant youth minister could have been able to get young people talking about the missal?” he asked. “I give thanks to God for this great moment that I can be a part of.”

Father Barron said children, who are “the least resistant to change,” will pick up the new wording quickly.

But introduction of the new translation throughout the English-speaking world can serve as an “occasion to teach them the traditions that are so much larger than them and their parish” and that they are “united with parishes around the world, from the rising of the sun to its setting.”

Edward Sri, provost and professor of theology and Scripture at the Augustine Institute in Denver and author of “A Biblical Walk Through the Mass,” compared the process of implementing the new missal to the preparations some of his students make for the annual trip to Rome that he leads.

They might have read about and seen pictures of the Vatican before taking the trip, he said, “but there is nothing like walking into St. Peter’s Basilica for the first time” and experiencing it in person.

“That’s the experience that many lay Catholics will be having in the next weeks and months” related to the new missal translation, Sri said. “They have heard about it, but now they are saying it, hearing it. It’s a wonderful opportunity to bring people deeper into the mystery of the Mass.”

Liturgical musician Matt Maher said the introduction of the new translation marks a moment when “the innovation of the culture meets the slow, deliberate movement of the church.” Although the media and the blogosphere might want to report immediate results, Maher said he was more excited about “the re-evangelization of the faithful” that might occur generations down the road.

“We live in a very, very tumultuous time of change” in today’s society, he added. “But the church always has the wisdom to reaffirm what is true and beautiful and important.”

As a musician who works with Christians of other denominations, Maher said he also found an “unintended consequence” of the new missal translation has been “a rise in interest in re-embracing liturgical spirituality.”

“As we are re-educating and re-evangelizing, there is a tremendous opportunity to be building bridges,” he said.

During a question-and-answer period, Cardinal Wuerl acknowledged that in the first days of using the new translation, he would sometimes find himself “drifting back” to the words of the former translation “if I didn’t keep concentrating.”

“Isn’t that the way for all of us?” he asked. “I have to be aware that I can’t take my eyes off the page. It made me much more conscious of the words and much more aware that I say those words in a way that was inviting the congregation into the mystery” of the Mass.

Father Barron said he found himself celebrating the Mass “in a way that I have not done since I was a deacon.”

Although he said the first weeks of the new translation might be “messy,” he said Catholics should be experiencing that fact that “God has come to be with us in our mess. That’s part of the life of the Mass.”