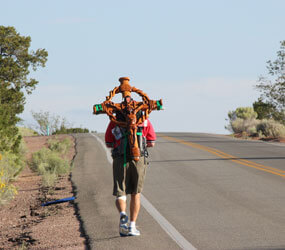 GALLUP, N.M. – For some, Father Emil Kapaun may be a footnote in a conflict many have come to know as the “Forgotten War,” but for John Moore of Gallup, the Korean War chaplain’s heroic exploits deserve the attention of congressional and Vatican officials in a movement to have the Kansas priest honored with the Medal of Honor as well as sainthood.

For his part, Moore, 61, embarked on a 630-mile pilgrimage Sept. 11 from the National Cemetery in Santa Fe to Pilsen, Kan., Father Kapaun’s rural hometown in the Wichita Diocese, where Moore arrived the morning of Nov. 11, Veterans Day.

He delivered a handmade wooden replica of the cross that has come to represent Father Kapaun, the Army chaplain who saved the lives of dozens of soldiers and died as a prisoner of war in Pyoktong, North Korea, May 23, 1951.

The model of the cross was designed by a fellow prisoner of war, Gerald Fink, a Jew who came to respect and love the diligent priest before his death.

A canonization cause for Father Kapaun was formally opened June 29, 2008, with a Mass at St. John Nepomucene Church in Pilsen. Church officials in Kansas and elsewhere had been collecting documentation to support the sainthood cause for years prior to its official opening.

Averaging 15.75 miles of walking per day, Moore said he only had three days of rain and heavy wind during his trek. Among the most grueling parts of the journey were the mountains of New Mexico and the lack of shoulders on some of the roads in Oklahoma and Kansas that wreaked havoc on his feet.

At one point, Moore lost his footing and fell scraping his knees and face. The fall caused the large wooden cross, which he carried attached to a backpack, to fall on top of him. Moore said later in an interview that both he and the cross needed slight repairs.

Moore said he became aware of Father Kapaun after reading a small article about the priest in the Knights of Columbus magazine last year and quickly became immersed in the saga of a man who served his country and men in the most deplorable of conditions.

Father Kapaun was among the first wave of American troops to arrive in South Korea after it was attacked by the communist North in June 1950. He arrived July 18 and never shirked his responsibility to provide comfort and religious services, often conducted on the hood of a Jeep, and guidance to his troops, even under heavy enemy fire.

It didn’t take long for the priest’s bravery to be recognized with the awarding of a Bronze Star in August 1950 when he rescued a wounded soldier in the midst of heavy enemy fire. On the frigid night of Nov. 1, 1950, Father Kapaun was captured after attempting to rescue some of his men.

The time spent in the POW camp was a life of deprivation but spiritual and life-sustaining responsibilities which he always performed with compassion and a smile. Father Kapaun died in the POW camp in May 1951.

Despite numerous testimonies confirming his bravery, the Medal of Honor has eluded Father Kapaun. There is a groundswell to have the medal bestowed to him posthumously.

It is the nation’s highest military honor, awarded by Congress for the risk of life in combat beyond the call of duty. In 2009, before he left office, then-Secretary of the Army Preston M. Geren III said he was deserving of it. Since then support for the honor has been growing, especially among those promoting his sainthood cause.

“I often think about all of the people he christened and married and what he did for his troops,” Moore said of his inspiration when his trek became difficult or lonely.

Quick to recognize the efforts of Moore is Hershey Miyamura of Gallup, a Medal of Honor recipient and a former POW. Miyamura, who has read about Father Kapaun, agrees the priest deserves the medal. He also feels Moore’s efforts go above and beyond the call.

“It is quite an honorable deed what John is doing,” Miyamura said. “I feel it is important to help the father’s family get him the medal but it also brings awareness to the public of what we did in Korea.”

Miyamura said the value of what Father Kapaun did was immeasurable for the troops.

“I saw so many young men die because they just gave up,” Miyamura said. “We needed to keep our faith and for them to have Father Kapaun among them would have been so uplifting for morale.”

Miyamura said he didn’t have a chaplain in his POW camp when he was there for nearly two years and recognizes the indisputable contributions Father Kapaun would have made.

Moore said the cross is made from an alligator juniper tree from Heber, Ariz., and was constructed by Mark Chavez, a retired Albuquerque firefighter.

I don’t want any recognition for this, I just look as myself as the donkey carrying Christ,” he said. “And anytime you do something for a veteran, you did good.”

More information about the effort to have the Medal of Honor award to Father Kapaun is available at https://frkapaun.org/medal.html.