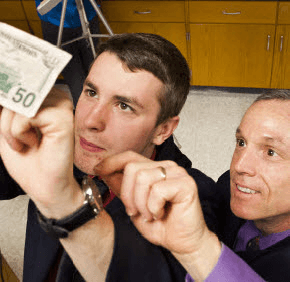 TOWSON – When most people reach into their wallet, they probably do not think about whether the bills they’re extracting are real or impressive imitations.

After learning about counterfeit bills, Calvert Hall College High School senior Michael Tobin said “I’m going to be sure to at least hold it up to the light” to check if the money is real.

In a new forensic science course offered at Calvert Hall, the four students in the class learned about forgery and counterfeiting before a U.S. Department of Homeland Security Secret Service special agent visited their classroom Jan. 9.

The special agent, who requested that his identity be concealed due to the nature of his job, talked to students about genuine currency and showed them counterfeit bills.

“That’s really cool, especially to see the kind of counterfeit stuff they have,” Tobin said.

Students learned how bill design has evolved in an effort to limit counterfeiting, the most common forged bills and how to determine if a bill is real or fake.

They also examined bills under microscopes and an ultraviolet light to differentiate real ones from imitations. Some of the counterfeit bills seemed so real that students weren’t sure which bills were real.

As part of their study of counterfeiting and forgery, students created their own currency. Inspired by Baltimore Raven Ray Lewis’ jersey number – 52 – one student made a $52 bill, Ward said.

Students have also learned how to process a crime scene and conducted fiber, glass, hair, handwriting and soil analyses, among other things, Motsay said. Students will be learning about DNA analysis.

In recent years, forensic science has become trendy on TV, with shows such as “CSI: Crime Scene Investigation” and “NCIS.” Some higher education institutions have added forensic science as a major.

Tobin, who watches “CSI” and is considering a forensic science major in college, likes that the class is “hands-on.”

Students apply to take the elective course, must have a certain GPA and be juniors or seniors, Ward said.

“Just the fact that we are trying something new, we are extending ourselves a little bit,” Motsay said. “It is good for our school, our students and our program.”