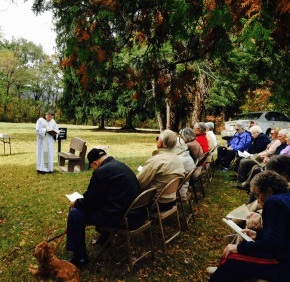 By Maria Wiering
mwiering@CatholicReview.org
Luann Hunsecker was 8-years-old when her mother was pregnant with twins. The youngest of four girls, Hunsecker was excited to be a big sister, but her exuberance gave way to confusion when her mother experienced complications, went into pre-term labor and delivered the two girls stillborn.
“I didn’t know what had happened, or why it happened,” she said.
She remembers the tiny caskets and the twins’ funeral, and that her mother, still recovering from childbirth, wasn’t allowed to attend.
Forty-six years later, Hunsecker still thinks about the little sisters she never knew.
“They were part of our family, even though they were stillborn,” said Hunsecker, Our Lady of the Mountains’ parish secretary. “You think about what they would have been doing now had they lived.”
She takes comfort knowing “they’re just in the arms of Jesus,” she said.
Hunsecker was among 40 people who gathered at St. Mary’s Cemetery in Cumberland Oct. 5 to remember babies lost during pregnancy or infancy. Capuchin Franciscan Father Gregory Chervenak led a 35-minute prayer service at a monument the parish recently erected for babies who died. The monument includes an angel with her hand over her heart and the words, “In loving memory of our precious infants.”
“All life is sacred,” said Father Chervenak, pastor of Our Lady of the Mountains, who held a similar prayer service last year. “We want to honor anyone of any faith to come to that place and remember their child.”
Honorable burial
Oct. 5 was Respect Life Sunday; the U.S. Conference of Catholic Bishops recognizes October as Respect Life Month.
It is also National Pregnancy and Infant Loss Awareness Month, which was particularly observed Oct. 15.
The prayer service’s mood was somber, with hymns accompanied by a harpist, Father Chervenak said. One baby remembered died three years ago; another, 58. Attendees, many of whom were elderly, received candles to light in memory of their babies.
Attendees signed a book of remembrance with their babies’ names: Sandra Lee, Bryan, Edna Marie. The book was later placed on the Marian altar at Cumberland’s Shine of Ss. Peter and Paul, one of the five churches comprising Our Lady of the Mountains.
“In our Christian faith, we know the child is with the Lord and we will be reunited one day together,” Father Chervenak said.
Father Chervenak plans to preside soon over another short liturgy at the monument – a burial of a dozen unclaimed cremated remains of babies miscarried at Western Maryland Regional Medical Center. For years, they have been in the safekeeping of a local funeral director.
“The hospital is very happy to know that we would be receiving them and honorably burying them,” Father Chervenak said.
A real loss
Donnie and Amanda Delauter brought their four living children, ages 2-11, to the Oct. 5 service to remember a baby Amanda, 37, miscarried four years ago. She had just realized she was pregnant when she miscarried, but the timing didn’t mitigate her grief.
However, she often felt discouraged from expressing it.
“For miscarriages, and especially early miscarriages, there’s a sense that nobody wants to say anything,” she said. “I’m sure it’s often because they don’t want to make you uncomfortable, but the implicit impression you get is that there is no loss, and you shouldn’t talk about it, and maybe you shouldn’t be making people uncomfortable with your grief.”
Attending the prayer service “made a huge difference,” she said. “It’s acknowledgment that we had a real loss.”
Parishioners of St. Michael, Frostburg, the Delauters named their baby Gabriel and pray for his intercession in heaven, Amanda said.
Also see:
St. Ursula couple chose life, although it also meant death
Angel of Consolation garden offers hope to those who have endured loss
20 ways to support a loved one as they grieve the loss of a baby
PrevNext