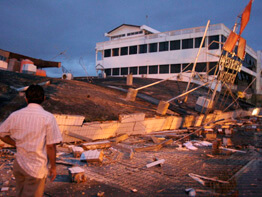 WASHINGTON – Though Indonesian Muslims may be hungry, thirsty and tired from Ramadan fasting, the “overwhelming need” to respond to victims of mid-September earthquakes is driving Indonesians to help, said a church aid worker.
Muslims already are sacrificing during the monthlong fast, and now they will be helping people who have suffered from the damage caused by the two earthquakes that hit the island of Sumatra within 24 hours, said Rich Balmadier, Catholic Relief Services’ Indonesia country director based in Jakarta.
Though Muslims may be physically less comfortable during Ramadan because they fast each day until sundown, from an organizational standpoint Ramadan will not affect emergency response, Balmadier told Catholic News Service in telephone interviews Sept. 12 and 13.
Balmadier said Sept. 13 he was still acquiring and assessing information and the full extent of damage caused by the quakes was not yet known. CRS, the U.S. bishops’ international relief and development agency, sent two teams to assess the coastal villages and more isolated villages in the mountains, he said.
Staff from the dioceses of Padang and Palembang, who know the countryside and local authorities, have been responding to local communities’ needs and are relaying information to CRS, Balmadier said. Indonesia is a mostly Muslim country, with only 3 percent of the population Catholic, but emergency assistance is not based on religious beliefs, he told CNS.
CRS, which has committed an initial $50,000 to the quake recovery effort, is supplying family kits, which Balmadier described as a “household in a box,” containing nonfood items such as cooking utensils, tarps and mosquito nets. CRS and its partners are mobilizing medicines, nonfood items, cleanup kits and other temporary shelter supplies, he added.
Tsunami warnings were issued and eventually lifted after the magnitude 8.4 quake Sept. 12 and the magnitude 7.8 quake that followed. The British news agency Reuters reported Sept. 13 that officials said at least 10 people had died.