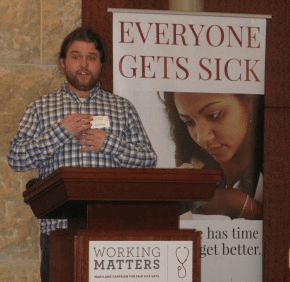 ezygmont@CatholicReview.org
Twitter @ReviewErik
Addressing a clinic escort for a Planned Parenthood facility in downtown Baltimore July 28, Jody Ward told her and other clinic workers and volunteers their lives were precious.
“Your life matters,” said Ward, who was participating in a pro-life rally at the North Howard Street clinic. “We will defend your lives just as we defend the lives of the innocent unborn.”
Frank Richardson, a parishioner of Ss. Philip and James Church in Baltimore, gave fiery testimony in support of the “culture of life” over “the culture of death,” but he added:
“We also pray that the culture of death will be brought into the culture of life.”
The rally, organized by Ward, who attends services at Forge Road Bible Chapel, and Sherrie Palmateer, a parishioner of St. Joseph in Fullerton, brought close to 100 pro-life activists, young and old, to North Howard Street, across the street from the Planned Parenthood facility.
The rally was one of about 65 rallies held across the U.S. by Women Betrayed, an outreach of Students for Life of America, Ward said. Activists at the Baltimore rally urged the crowd to pray for an end to abortion, to demand through their national representatives that Planned Parenthood be defunded, and to sign a petition urging 2016 presidential candidates to commit to defunding Planned Parenthood.
Speaking to the crowd, Betty Winberry tearfully recounted her own experience with abortion. After her first, she said, she didn’t remember who drove her to the clinic, or which clinic she went to. She only remembers returning home and lying on her mattress, “feeling like I had died.”
Winberry became pro-life, she said, when she walked out of an abortion clinic in the early 1990s, opting instead to bring her daughter, now 23, to full term. Winberry said that when she was six weeks pregnant, members of her Assembly of God congregation prayed over her for the life of her baby. She later sought out an abortion anyway, she said.
“I thought, ‘Well, I guess that prayer didn’t work,’” she remembered.
However, as she and her then-husband waited in the clinic, the space seemed to become “like ‘The Twilight Zone,’” Winberry said, adding that people’s faces “became distorted” and the place “felt evil.”
She said she felt God tell her, “I’ve got you,” and she walked out of the clinic.
“That’s all I needed,” she said. “I just needed God to carry me through this.”
She motioned toward the 10 or so people in Planned Parenthood T-shirts across the street, holding neon-colored signs in support of the organization.
“They don’t know what they don’t know,” Winberry said. “I’m on the other side of the street now, and they’re welcome to join us any time.”
The rally came in the wake of the release of three videos by the Center for Medical Progress. The group members posed as buyers of fetal organs and body parts to gain access to top Planned Parenthood officials. In the videos, the officials are seen discussing the monetary value of the organs and body parts, and how abortions may be performed to avoid damaging those body parts most in demand.
Palmer skewered the notion that a fetus in the womb is “just a clump of cells.”
“Oh really, Planned Parenthood,” she said. “Is that why you’re making money selling livers, hearts and limbs – from a clump of cells?”
Ward drew parallels between abortion and the July 4 slaying of Kevin Sutherland aboard the subway in Washington.
“(Sutherland) did not know his attacker,” she said. “He was innocent. His attacker did not know him. But for reasons we will never understand, his life was brutally taken from him at the age of 24.”
Ward told the Catholic Review the release of the videos could mark a “watershed movement for the pro-life movement.”
“People are really being forced to confront what is the unborn,” she said. “They are fully human, and they deserve the right to life and our protection of that right.”