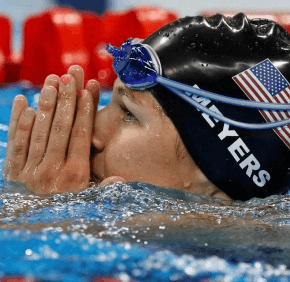 Rebecca Meyers is majoring in history in college.

She made some Sept. 8 at the 2016 Paralympic Games in Rio de Janeiro.

A parishioner of St. Joseph in Cockeysville and 2013 graduate of Notre Dame Preparatory School in Towson, Meyers earned her first gold medal in the Paralympics with a world record in the S13 100-meter butterfly.

Meyers was still an NDP student in 2012, when she earned silver and bronze medals at the London Paralympics.

“It feels so amazing,” Meyers told the media in Rio. “I am so excited to win the first gold medal for U.S. Paralympics Swimming, and we are going to kill it for the rest of the week. I can’t wait to see what everyone else does.”

Reaching the pinnacle of her sport did not come easy for Meyers, who was born deaf but found advocates at both St. Joseph School and NDP, who helped her navigate her way through her Usher syndrome and use of cochlear ear implants. The condition has also had a severe effect on her vision.

“I am grateful for my Catholic education,” Meyers told the Catholic Review in mid-August, during an interview conducted by email. “All the teachers (at NDP) taught me to advocate for myself, and that has helped me be successful.

“In an all-girls’ environment, we were taught how to be strong, how to lead, and how to be independent. I take all of those qualities, in and out of the pool, wherever I go. NDP embraced my disabilities and taught me how to shine.”

Meyers is taking a sabbatical from her studies at Franklin & Marshall College in Lancaster, Pa. She transferred there after a stop at Loyola University Maryland in Baltimore. While its swim program has five Paralympians in Rio, its campus was not the right fit for Meyers.

“During my first year away at college, I had a very difficult time,” Meyers said. “I was alone for the first time and had to really face my disabilities. That was a struggle and I had to look inside myself and realize that I am not the average college student, so I might have to do things a little differently.

Rebecca Meyers, a 2013 graduate of Notre Dame Preparatory School in Towson, swims for the gold in the S13 100-meter butterfly at the 2016 Paralympics in Rio de Janeiro Sept. 8. (CNS photo/Carlos Garcia, Reuters)

“When I landed at F&M, I found I was more secure in who I was and could really thrive there. I had to trust that God had a plan for me and even though it was a huge struggle, I did come through with a better understanding of myself in the world.”

When she is not away at college, Meyers trains under coach Erik Posegay at the North Baltimore Aquatic Club, the same club that produced Michael Phelps, the most decorated Olympian ever.

Meyers has already received a substantial education representing the U.S. Asked the favorite stamps in her passport, she said, “Germany. It was fun to explore the history and culture of Berlin and Stuttgart.”

“What I really want to do in the future,” she told the Catholic Review, “is be an advocate and role model to those with a disability.”