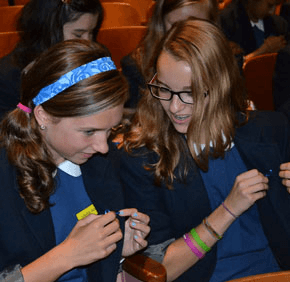 TOWSON – At a surprise assembly to celebrate their recognition as a National Blue Ribbon School, Notre Dame Preparatory School students and staff affixed blue ribbons to their clothes and enjoyed Almond Joys – candies wrapped in blue and symbolizing “joy.”

At the Sept. 7 assembly, NDP school leaders announced the honor to students in a packed auditorium – evoking loud cheers and applause from the crowd.

“We were honored and humbled at the recognition,” said School Sister of Notre Dame Patricia McCarron, NDP’s headmistress. “It’s really exciting that the entire nation knows what a great school Notre Dame is.”

This is the second time the Towson school has been recognized as a National Blue Ribbon School, having received the same honor in the 1984-85 school year.

“It’s really about student achievement,” Sister Patricia said. “It’s about that history and continuing that standard of excellence. Every day is a blue ribbon day at Notre Dame Prep.”

“It’s great to know I’m going to a school with such quality education,” Etienne said. “It’s great to see your school is being chosen for such a prestigious award. We already knew our school was awesome.”

The award is the highest academic honor bestowed by the U.S. Department of Education, recognizing public and private elementary, middle and high schools where students perform at very high levels or where significant improvements are being made in students’ levels of achievement.

St. Augustine School in Elkridge also received the distinction Sept. 7. Students marked the honor by holding blue balloons and standing together to form the initials of their school during an outdoor celebration.

These two schools were among 269 across the nation to be recognized with the coveted honor this year. They were two of 50 private schools to receive the honor.