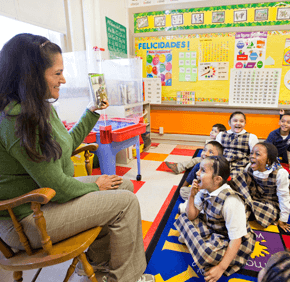 Archbishop Borders School in Highlandtown has been selected to participate in an initiative which school leaders say will enhance its dual-language program.

Archbishop Borders is one of 12 Catholic schools from across the U.S. selected to participate in the Two-Way Immersion Network for Catholic Schools (TWIN-CS).

The program is the first initiative through the Innovation Institute, an alliance of the National Catholic Educational Association (NCEA) and the Boston College Roche Center for Catholic Education, designed to create programs to provide deeper learning opportunities for students, according to information from the NCEA.

Archbishop Borders is the only Catholic school in the Archdiocese of Baltimore with a dual-language curriculum, an immersion program in English and Spanish.

Dr. Barbara McGraw Edmondson, superintendent of Catholic schools, said “the fact that we have a dual-language program makes us a great candidate for the Innovation Institute.”

“One of the true gifts of the program” is the collaboration with schools from across the country, Edmondson said.

That collaboration includes communicating with the other 11 schools, visiting a school with a dual-language program and in June, participating in a week-long workshop at Boston College with leadership teams from each of the 12 schools, said Cathy Marshall, principal.

In addition, through TWIN-CS Archbishop Borders will receive feedback on its dual-language program, curriculum, assess materials and receive guidance from a professional well-versed in linguistic studies, Marshall said. Their mentor is from Loyola University Maryland in Baltimore.

“They know what works,” Marshall said.

At Archbishop Borders, students in pre-kindergarten for 4-year-olds through first grade receive instruction in some classes only in Spanish and others only in English, Marshall said. Second grade will be added for the 2013-14 school year and the program will expand to other grades in the coming years, with the goal of making English-speaking and Spanish-speaking children fluent and literate in both languages by graduation.

“The program really is for English speakers, but it will help Spanish speakers read and write in Spanish,” said Marshall, who noted approximately 50 percent of the school’s 134 students come from Spanish-speaking families.

Most Spanish-speaking students are bilingual, but many lack reading and writing skills in their native language, Marshall said. The dual-language program encourages both languages to be used inside and outside the classroom.

For more articles on Catholic schools in the Archdiocese of Baltimore, click here.