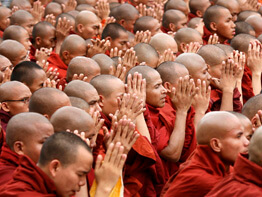 BANGKOK, Thailand – The Catholic Bishops’ Conference of Myanmar called on Catholics to pray for their country as street demonstrations by Buddhist monks against the military government escalated.

In a statement issued Sept. 26, the bishops said the church had been praying for the country, and, though it is not involved in party politics or the current protests, Catholics “are free to act as they deem fit.”

The Asian church news agency UCA News in Bangkok obtained a copy of the statement signed by Archbishop Charles Bo of Yangon, general secretary of the bishops’ conference, and Archbishop Paul Zinghtung Grawng of Mandalay, president of the conference.

Journalists reported that security forces in Yangon were breaking up the demonstrations, beating and arresting protesters. The reports said several thousand Buddhist monks and students rallied Sept. 26 at the famous Shwedagon Pagoda in Yangon, Myanmar’s largest city and former capital, despite a ban on public gatherings of more than five people and a nighttime curfew imposed the day before.

Monks have been demonstrating in Yangon and other cities against spiraling inflation, corruption and the government’s continued suppression of democracy.

Government officials in Myanmar, formerly Burma, warned the monks to halt the protests after a reported 100,000 people joined marches in Yangon Sept. 24. It was the largest anti-government display since the military violently suppressed a 1988 pro-democracy uprising, but some media reported that 100,000 marched again Sept. 26 and several people were killed.

Both are Nobel Peace Prize laureates, as is Aung San Suu Kyi, whom Myanmar’s government has kept under house arrest most of the time since 1990. Her political party won a landslide victory in elections that year, but it was not allowed to take power.