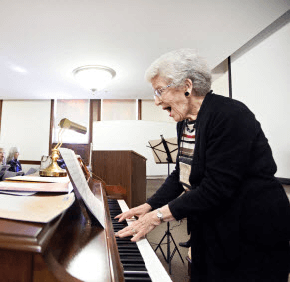 “Feet on the floor. I see some legs crossed.”

Helen Brown turns to the upright piano and plays the opening chords. The choristers diligently follow their parts in “Singing in the Rain,” one of five pieces they were preparing to perform at an upcoming luncheon. Halfway through the song, Brown waves her hands and sends her choir back to page five, where they resume the chorus: “What a glorious feeling ….”

Brown retired from the music classroom in Baltimore City’s public schools more than 30 years ago, but she never really stopped teaching. Now 90, she gives music courses, takes classes and directs the choir at Notre Dame of Maryland University’s Renaissance Institute, which offers peer-taught courses and social activities for seniors.

She joined the institute the year it was founded, in 1989. An alumnus of what was then the College of Notre Dame of Maryland, she was eager to teach others about music, her lifelong passion.

She earned her degree in music and taught at four of Baltimore’s public schools while raising five children. Even when she retired after 35 years, she worked with Baltimore County Library’s music collection.

Since beginning with the Renaissance Institute, Brown estimates that she has taught 35 courses on topics ranging from American wartime music to opera. It was in that opera class that she asked her class to sing from George and Ira Gershwin’s “Porgy and Bess.” After hearing the result, she decided to form a choir three years ago.

The choir now performs for the institute twice a year – at a spring luncheon marking the end of the semester, and at a Christmas-Hanukkah-Holiday celebration. Brown carefully selects the music for each show according to the choir’s ability, and tries to add a more challenging piece each time.

A person has to share his or her talents, Brown said, a belief she applies to her students as much as to herself. When Brown wished aloud for a flute to accompany a piece, a student who had once played it volunteered to pick it up again. That student now takes lessons and plays with the choir, but she doesn’t think she would have played again if Brown hadn’t urged her to, she said.

At 61, Vickie Lapicki is the youngest in the choir, which has about 25 members. Before joining two years ago she had never read music, but she has learned a lot, thanks to Brown’s kindness and patience, she said.

“Life is beautiful if people would just wake up and smell the roses. There’s so much to do,” Brown said.

And Brown does plenty. She attends the symphony, the opera and the theater, and plays for most Masses at Mercy Ridge, the retirement center where she lives. She also organizes social events for Renaissance Institute participants and serves on three of its committees.
“I just love it,” she says. “This is my life and I love it.”