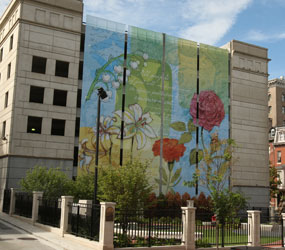 The Pope John Paul II Prayer Garden in downtown Baltimore has a colorful new backdrop in the form of a large mural that covers most of one side of a parking garage on Charles Street.

Composed of four 60-foot- tall, 14-foot-wide panels, the mural features four flowers symbolic of the Blessed Virgin Mary and four quotes on the environment from Pope John Paul II. The artwork also incorporates an interior view of the dome of the Basilica of the National Shrine of the Assumption of the Blessed Virgin Mary, which is located on the same block as the prayer garden.

“We’re thrilled with the upgrade,” said Mark Potter, executive director of the Basilica of the Assumption Historic Trust. “We definitely believe it’s an improvement to the garden and will provide some needed beauty in the wintertime when it’s not very colorful.”

Designed by RTKL of Baltimore and installed Sept. 4-5, the mural is rich in symbolism. The flowers were chosen because of their connection to the mother of Christ. They include a rose, whose petals were used by early Christians to make rosary beads; Lilies of the Valley, also known as “Our Lady’s Tears” because they are said to have grown where Mary wept; a Marigold, a flower known as “Mary’s gold” that early Christians placed around statues of Mary in place of coins; and lilies, symbol of the Annunciation and Mary’s purity.

The papal quotes adorning the mural encourage onlookers to appreciate the beauty of nature and take care of creation.

“Everyone likes it,” said Douglas Johnson, capital project manager for the Archdiocese of Baltimore. “The colors are great.”

Originally intended to be installed in time for last year’s dedication of the prayer garden, the mural’s debut was delayed after it took longer than expected to win city approval to put it up. The garage is currently owned by the city, while the land on which it rests is owned by Catholic Charities.

The mural, which cost $75,000, was paid for with private donations.