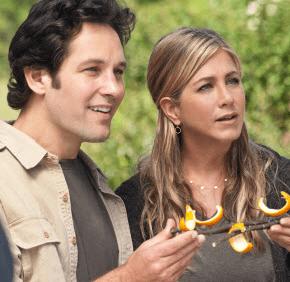 NEW YORK (CNS) — When one of the lead characters in “Wanderlust” (Universal) asks rhetorically why he can’t seem to go more than a short period of time without another man’s private parts being waved in his face, he might as well be speaking on behalf of viewers.

For a gauntlet of such childish attempts to shock, as well as relentless lashings of tawdry language, await in director and co-writer David Wain’s insubstantial and distasteful comedy.

The proceedings center on young New Yorkers George (Paul Rudd) and Linda (Jennifer Aniston), unremarkable urbanites who — through a convoluted plot point — find themselves living in a hippie commune lifted straight out of the 1970s.

They have stumbled on Elysium, a rural community where drugs, free love and an absence of boundaries are the order of the day.

The picture does provide some amusing moments, and its relatively pleasing wrap-up affirms the beauty of monogamy. However, this acceptable conclusion is preceded not only by the above-cited gross-out humor, but by an incident of adultery treated more like a harmless mistake than an assault on the bonds of marriage. In sum, the script, penned in collaboration with Ken Marino, demeans human sexuality far more than it celebrates loving fidelity.