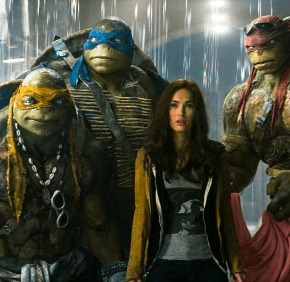 By Joseph McAleer
Catholic News Service
NEW YORK – Thirty years after bursting onto the comic book scene, the wise-cracking, pizza-loving “Teenage Mutant Ninja Turtles” (Paramount) re-emerge from the sewers of New York City. Their mission, once again: to save the world.
This reboot marks the fifth film to feature the reptilian heroes, created by Peter Laird and Kevin Eastman. With Michael Bay of the “Transformers” franchise on board as producer, action and destruction (and noise level) are ramped up in vivid 3-D, with the turtles effectively rendered through live action and motion-capture technology.
Fortunately, the script, by Josh Appelbaum, Andre Nemec and Evan Daugherty, honors the ridiculousness of the subject matter and keeps tongue firmly in cheek. Director Jonathan Liebesman (“Wrath of the Titans”) joins in the fun while slipping in a few good lessons about honor and family.
The backstory and mythology surrounding the Turtles are extensive, to say the least. Simply stated, there are four, each named (for no particular reason) for an Italian Renaissance artist: Leonardo (Pete Ploszek), Raphael (Alan Ritchson), Michelangelo (Noel Fisher), and Donatello (Jeremy Howard).
Products of an experiment gone wrong, they have grown into rambunctious anthropomorphic teenagers, mask-wearing 6-footers who shout “Cowabunga!” and scarf down ‘za.
The turtles live beneath the Big Apple with a wise Japanese rat named Splinter (Danny Woodburn), who has trained them in the martial arts.
“My sons, you will become the warriors that legends are made of,” Splinter says. “You live, you die, you fight as brothers. Remember, nothing is as strong as family.”
As Leonardo admits, “We were created as weapons, and we knew the world would never accept us … but one day, it would need us.”
That day is now, for a reign of terror has gripped Gotham, thanks to the notorious Foot Clan, a seemingly invincible gang of criminals led by a razor-sharp monster appropriately dubbed Shredder (Tohoru Masamune).
At first, the turtles do battle at night, fighting the Foot Clan while protecting their identity. All that changes when April (Megan Fox), an intrepid TV reporter, stumbles upon their ninja moves.
Excited by her first big scoop, April has a hard time convincing Vern (Will Arnett), her cameraman, and Bernadette (Whoopi Goldberg), her skeptical boss, of the turtles’ existence.
So she turns to an old family friend, billionaire industrialist Eric Sacks (William Fichtner), for help. He’s a scientist, with more than a passing interest in mutated reptiles – and a wicked secret alliance with Shredder for (of course) world domination.
If it all sounds silly, it is, and “Teenage Mutant Ninja Turtles” is more thrill-ride than serious drama. As such, the action sequences may be too intense (and loud) for young viewers. Everyone else, however, will have a ball careening down sewer tunnels as though they were water slides on steroids.
The film contains intense but bloodless cartoon violence, some bathroom humor, and a few vague references to sexuality. The Catholic News Service classification is A-II – adults and adolescents. The Motion Picture Association of America rating is PG-13 – parents strongly cautioned. Some material may be inappropriate for children under 13.
McAleer is a guest reviewer for Catholic News Service.
Also see:
Movie tells story of Catholic high school football team’s amazing win streak
Former major league baseball player shares baseball skills, deep faith at camp
Copyright (c) 2014 Catholic News Service/U.S. Conference of Catholic Bishops
PrevNext