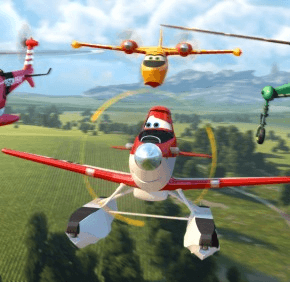 By Joseph McAleer
Catholic News Service
NEW YORK – Anthropomorphic aircraft take to the skies again in “Planes: Fire & Rescue” (Disney), a lively follow-up to last summer’s franchise kickoff, “Planes.”
Directed by Roberts Gannaway from a screenplay by returning writer Jeffrey M. Howard, “Planes: Fire & Rescue” is that rare sequel which surpasses the original in action, adventure, and 3-D animation. That last element is especially vivid and immersive. In fact, the looping aerial scenes may even make some viewers queasy.
The humanless universe that originated with the “Cars” film series is cleverly expanded, with new autos, boats and trains joining the fun.
Amid the many sight gags and puns, there’s a positive message about personal sacrifice on behalf of those in need, expressed by the fearless air-attack teams and smoke jumpers battling fires deep in the California forest.
Picking up where “Planes” left off, the sequel finds Dusty Crophopper (voice of Dane Cook), the humble cropduster-turned-racing-champion central to the first movie, an international celebrity. Life is good, until an accident reveals a deadly secret: Dusty’s gearbox is failing.
For a racer, this spells doom. Unless Dusty slows down, he may never fly again.
An opportunity to switch gears – and careers – arises in Piston Peak National Park. There an elite firefighting crew, led by veteran rescue helicopter Blade Ranger (voice of Ed Harris), is dedicated to protecting the forest – and the tourists who frequent a new hotel, the Grand Fusel Lodge.
Assisting Dusty in his training regimen are Lil’ Dipper (voice of Julie Bowen), a love-struck “super-scooper” aircraft (which carries water or flame retardant), and Windlifter (voice of Wes Studi), a heavy-lift helicopter who serves as the park’s resident sage.
When a major fire burns out of control and threatens the hotel, Dusty is put to the ultimate test and witnesses true heroism in action.
Some of the nail-biting action scenes in “Planes: Fire & Rescue” may be a bit intense for the youngest viewers. Additionally, a few double entendres – presumably aimed at adults – may raise concerns for parents. While these one-liners are likely to pass at an elevation well above kids’ heads, their slightly incongruous presence precludes endorsement for all.
Adults, on the other hand, will appreciate the cameo voices and inside jokes. As one depressed car says to a hotel bartender, “She left me for a hybrid. I didn’t even hear him coming.”
Blade Ranger’s backstory includes being the star of a cult television series called “CHoPs,” short for California Helicopter Patrol, a riff on the 1977-83 television series “CHiPs.” His TV sidekick, Nick “Loop’n” Lopez, is voiced by none other than Erik Estrada, the original “Ponch” of “ChiPs.”
The film contains a few perilous situations and some mildly suggestive humor. The Catholic News Service classification is A-II – adults and adolescents. The Motion Picture Association of America rating is PG – parental guidance suggested. Some material may not be suitable for children.
McAleer is a guest reviewer for Catholic News Service.
Also see:
Leap of faith: St. Clare dance camp nurtures body and soul #video
Franciscan Monastery in Washington, D.C., offers oasis of peace
Copyright (c) 2014 Catholic News Service/U.S. Conference of Catholic Bishops
PrevNext