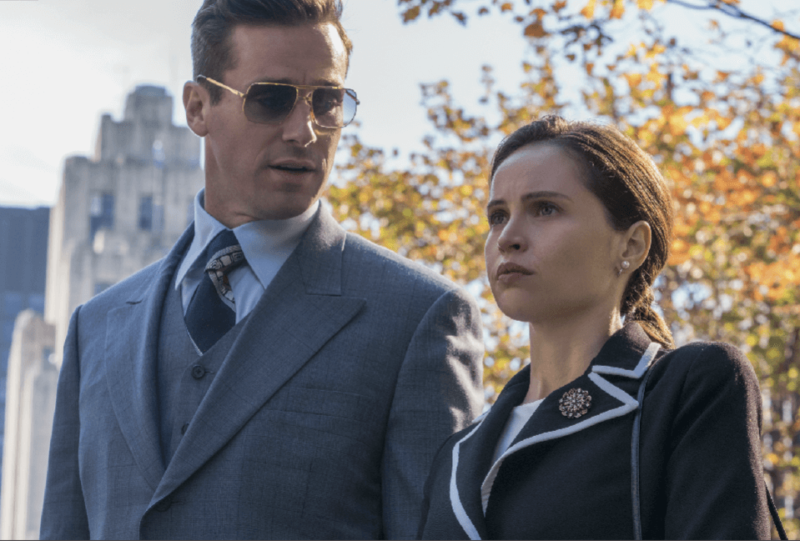 Armie Hammer and Felicity Jones star in a scene from the movie "On the Basis of Sex." The Catholic News Service classification is A-III -- adults. The Motion Picture Association of America rating is PG-13 -- parents strongly cautioned. Some material may be inappropriate for children under 13. (CNS photo/Focus)

NEW YORK — From “On the Basis of Sex” (Focus) one learns that even though a tax case may be destined to serve as a landmark for equal treatment under the law — as well as a breakthrough for future Supreme Court Justice Ruth Bader Ginsburg (Felicity Jones) — it’s nearly impossible to keep stodginess at bay.

When a film’s dramatic highlight is not the big federal appeals court drama at the end, but rather the preceding moot-court scene as the lawyers prepare, it had better have some compelling dialogue and performances. This film does not.

Midway through, Mel Wulf (Justin Theroux), the legal director of the American Civil Liberties Union, snaps at Ginsburg, “Morality does not win the day, look around you!” Later, as she prepares her arguments — the delivery of which she eventually shared with her husband, Martin, played by Armie Hammer — Mel exhibits his own latent chauvinism by inquiring, “Would it kill you to smile?”

Moral courage does, of course, prevail, and the film is an unapologetically heroic narrative correct in its historical details even when the dialogue lurches into wooden cliches, lacking only a college fight song to pump up emotion at its conclusion. There are no elements definitively precluding mature adolescents, although they’re likely to regard the film more as a homework assignment than a piece of entertainment.

Ginsburg, who is shown on the receiving end of withering male condescension at Harvard Law School and later at the ACLU, where she worked as counsel after finding that no law firms would hire her, is also portrayed as an immaculate wife and mother. She nurses Martin through a cancer scare in law school and also attends his classes as well as her own, later raising a son and a daughter.

Her breakthrough case was 1972’s Moritz v. Commissioner of Internal Revenue, in which a Colorado man, Charles E. Moritz (Chris Mulkey), appealed a Tax Court ruling that he was not entitled to a deduction for expenses for the care of his invalid mother.

Government lawyers took the position that Moritz, because he was an unmarried single man, couldn’t take the deduction because it was limited to a woman, whether widowed or divorced, or a husband whose wife was incapacitated. Inequality on the basis of sex was enshrined in all manner of laws at the time, and these were still the days when a wife could only get a credit card in her husband’s name.

By taking on the case of a man denied equal protection under the law, Ginsburg didn’t have to wade into the thicket of equal rights for women and could advance her cause through incremental rulings.

The story of her role in the case, retold many times in different venues, continues to inspire. This version of it, however, may feel a bit like cramming for a final exam.

The film contains a scene of marital sensuality, at least one use of profanity, a couple of milder oaths, a single rough and several crude terms. The Catholic News Service classification is A-III — adults. The Motion Picture Association of America rating is PG-13 — parents strongly cautioned. Some material may be inappropriate for children under 13.