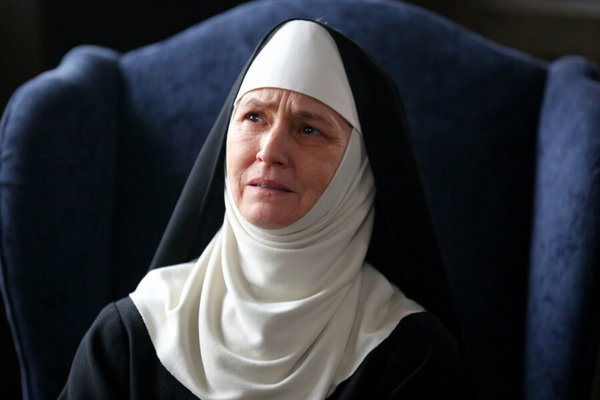 NEW YORK — Writer-director Margaret Betts takes a stab at a genre that always seems to fascinate people, even those with no religious affiliation: nun movies.

Unfortunately, “Novitiate” (Sony Classics) falls short of presenting a well-rounded picture of what it is — or, in this case, was — like for a young woman to enter religious life and discern whether it’s right for her.

The year is 1964 and the Second Vatican Council is in full swing. 17-year-old Cathleen (Margaret Qualley) decides to enter the convent after “falling in love” with God. Although she has not been baptized, she has attended Catholic school and found solace and peace in the church’s ritual and prayer.

Cathleen joins the (needless to say, fictional) Order of the Sisters of Blessed Rose where the strict and formidable Reverend Mother (Melissa Leo) lords it over her charges with an iron rod. Especially dedicated to silence, Reverend Mother has little tolerance for those young women who cannot toe the line.

This historical drama is also a coming-of-age story, as Cathleen and the other novices undergo training and struggle with questions of faith, sexuality and the changes the church faces in the wake of Vatican II. An artistic film with compelling performances, especially by Leo and Qualley, “Novitiate” nonetheless reveals its creator’s lack of familiarity with Catholicism.

The movie also ultimately takes a stand viewers of faith are bound to reject.

“Novitiate” relies heavily on the “Bride of Christ” metaphor for religious life and speaks, sometimes eloquently, of the love nuns have for their spouse, God. It also presents times past when emphasis was placed on sacrifice and denial of self, especially through a practice known as the Chapter of Faults.

At these group meetings, the novices kneel in a circle on the floor while one of them moves to the middle of the gathering and tearfully confesses her failings to Reverend Mother. Her sisters are then invited to make accusations about any misbehavior they may have observed on the part of the penitent.

This aspect of monastic life was meant to encourage rigorous morality, and keep the community healthy by cleansing it of festering secrets. Yet, as portrayed here, it will certainly strike even some Catholics as extreme. All the more so, since Reverend Mother manipulates the process to her own ends.

Betts, who admits she never gave religion much thought, was inspired to write “Novitiate” after reading the letters of St. Teresa of Kolkata and learning how intimate the bond between a nun and God actually is — and how much work goes into that relationship. She was also fascinated by the way Vatican II affected religious life and the fact that many nuns chose to leave the convent as the result of its reforms.

Unfortunately, the fact that Betts relied on ex-nuns as her consultants shows in some of the more outrageous aspects of the film.

The movie gets its subject matter wrong on many levels. An unbaptized person, for instance, would never be allowed to enter a convent, no matter how devout or in love with God she might be. And if a nun burst into the dining room naked, railing against the church — as happens at one point here — there would be more than snickering from her sisters in response.

The characterization of the evil, repressed Reverend Mother, moreover, is stereotypical, as is that of Sister Mary Grace, the younger, more open-minded nun who clashes with her, played by Dianna Agron of “Glee” fame.

Additionally, Betts fully, albeit implicitly, partakes of contemporary society’s misguided notion that chastity is both unhealthy and unattainable and that all consensual sexual expression is somehow liberating.

The sight of two sisters violating their vows of chastity — although treated discreetly — is bound to be distasteful to Catholic moviegoers. Even more disturbing, however, is the conclusion one of them draws from the experience. Namely, that there is something greater to be found in this world than the love of God.

Sister Hosea, a Daughter of St. Paul, is a guest reviewer for Catholic News Service.