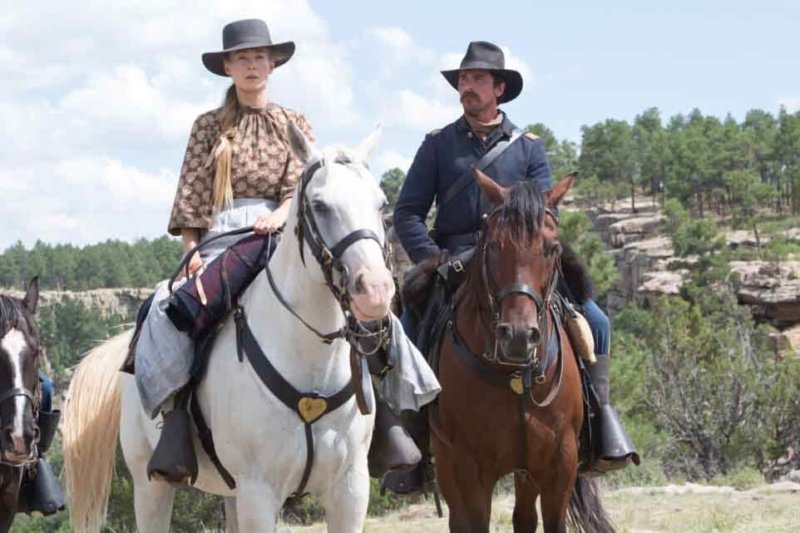 NEW YORK — “Hostiles” (Entertainment Studios) works from the premise that not only were white soldiers in the 1890s aware of their complicity in the decades-long genocide of Native Americans, they could feel immense, paralyzing guilt about their actions.

The end result is more than a bit anachronistic — white supremacist beliefs at the time were the norm, and the all-consuming energy required for daily life in the untamed American West allowed little time for reflection — but director-writer Scott Cooper wishes to make a strong moral case.

So he opens with a quote from British novelist T.H. Lawrence, who wrote in 1923 about James Fenimore Cooper’s 19th-century novel “The Deerslayer”: “The essential American soul is hard, isolate, stoic and a killer. It has never yet melted.”

Times were tough, hearts were hard and disputes were settled at the point of a gun. Sounds like the opening of most episodes of the TV western “Gunsmoke.”

Except that there’s no Marshal Dillon here to set matters right. Cooper’s protagonist, taciturn Capt. Joseph Blocker (Christian Bale), is wracked with anguish about the slaughter he’s undertaken as well as the violence inflicted on virtually anyone he’s worked with during his Army postings. He’s killed, and seen his men killed by, the Native Americans they’ve been separating from their ancestral lands and way of life and putting them on impoverished reservations in the name of manifest destiny.

Blocker, despite his emotional damage, is an educated sort who reads Julius Caesar’s writings in the original Latin. He thinks of his task as somehow noble, but nearly rebels when he’s ordered to escort a dying Native American chief, Yellow Hawk (Wes Studi) and his family from New Mexico to Montana.

Along the way, he picks up Rosalee (Rosamund Pike) the lone survivor from a massacre of her family by rampaging Comanches. She’s catatonic from losing her husband and young children, but somehow restores her bearings to regard Yellow Hawk’s family with compassion. At another stop, they pick up convicted criminal Philip (Ben Foster), who will face a military execution at the end of the journey.

Master Sgt. Metz (Rory Cochrane) brags of having made his first kill at age 14 during the Civil War, but he, too, succumbs to the accumulation of grief.

To survive on this sad, loping journey requires everyone to find common ground so they can repel the ongoing threat of Comanche raiders. This dips into the ancient racial trope of “good” and “bad” Native Americans, and also creates, as the lone form of suspense, the question of who will die along the way.

The story would undoubtedly have worked better if only a couple of the principal characters were deeply depressed. But Cooper gives everyone an overwhelmingly sensitive conscience and a sense of how they’ll be regarded by history. The result is an unrelentingly unsentimental road trip that can be appreciated by an adult audience aware of how many times Cooper wants to just wear them down.

The violence and racism are matter-of-factly and realistically portrayed. There’s no mythology here, and also no joy. Any character, if exceedingly fortunate, becomes merely a survivor.