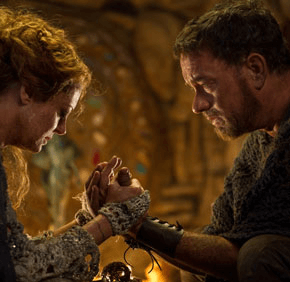 Co-written and directed by Lana and Andy Wachowski and Tom Tykwer, the ambitious adaptation upholds many principles with which viewers dedicated to Judeo-Christian morality can agree – the equal dignity of all human beings prominent among them. But its implicit plea for the breaking down of racial and social divisions extends, under the familiar guise of universal tolerance, into an endorsement of behavior incompatible with a Gospel-driven life.

The messages conveyed through these half-dozen tales are mostly positive, if sometimes ponderously expressed.

Thus Victorian-era lawyer Adam Ewing (Sturgess) overcomes prejudice through his encounter with – and rescue of – a runaway slave named Autua (David Gyasi). In the dystopian mid-21st century metropolis of Neo Seoul, a “fabricant” called Sommi-451 (Bae) rebels against her fate as a being genetically engineered to toil her brief life away in a McDonald’s-like fast-food restaurant.

Back in 1973 San Francisco, crusading journalist Luisa Rey (Berry) may have to risk life and limb to expose a potentially catastrophic conspiracy at nuclear power plant.

Christian moviegoers are bound to welcome cinematic parables affirming the bonds that unite us all or celebrating the courage that’s sometimes required to do the right thing on behalf of others. But the writing trio’s script ventures into more divisive territory via a segment set in 1936 Britain.

Other problematic elements include the debunking of a fictional faith – 200 years after her own time, Sommi-451 has been turned into a goddess. Since the cult surrounding her is obviously idolatrous, its downfall is certainly a triumph for truth. But it remains unclear whether the incident is intended as an attack on real-life religion.

Additionally, there are hints in the dialogue that some of the characters may be reincarnations of people we’ve gotten to know in the earlier sections of the vast chronology.