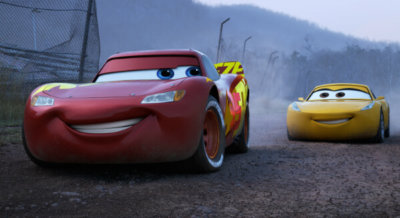 This is a scene from the movie "Cars 3." The Catholic News Service classification is A-I -- general patronage. Motion Picture Association of America rating is G -- general audiences. All ages admitted. (CNS photo/Disney)

NEW YORK — Fasten your seatbelts and start your engines for a wild (and often ear-splitting) ride in “Cars 3” (Disney), the latest installment of the family-friendly animated franchise.

Six years after the initial sequel and 11 since the series began with “Cars,” the anthropomorphic autos are back with a vengeance. Director Brian Fee ramps up the racing action (and the roar of the engines) while introducing a fleet of new characters sure to please young viewers — not to mention toy manufacturers.

Happily, there’s much more than the dizzying blur of NASCAR-like action. Screenwriters Kiel Murray, Bob Peterson and Mike Rich inject a nice amount of heart and pathos into the comedic plot, and add winning messages about second chances and the value of mentoring.

The years have been kind to ace racer Lightning McQueen (voice of Owen Wilson). He’s still at the top of his game. But just over his shoulder is a new generation of faster vehicles, like the brash rookie Jackson Storm (voice of Armie Hammer).

“Enjoy your retirement,” Jackson tells Lightning as he whizzes past.

In a flash, Lightning is sidelined by an accident. Disillusioned and depressed, he retreats to his adopted home of Radiator Springs. There he draws on the support of his loyal tow-truck sidekick, Mater (voice of Larry the Cable Guy), and comely Porsche sweetheart, Sally (voice of Bonnie Hunt).

Sally knows Lightning must look to the future. “Don’t fear failure,” she insists. “Take a chance. Try something new.”

A spiffy fresh paint job by Ramone (voice of Cheech Marin) helps. “It’s so beautiful,” Ramone says of his own work, “it’s like the Sistine Chapel!”

With his spirits buoyed, Lightning heads to the training center run by his sponsor, Rust-Eze, and its new owner, the “businesscar” Sterling (voice of Nathan Fillion). His eager young coach, Cruz Ramirez (voice of Cristela Alonzo), is thrilled with her new, if elderly, charge.

“You’re my senior project!” she gushes.

As the bond between veteran racer and rookie wannabe grows, Lightning recalls the wisdom of his dearly departed mentor, Doc Hudson (voice of Paul Newman). On a whim, he takes Cruz on a road trip to find Doc’s original trainer — a grizzled ’51 Ford named Smokey (voice of Chris Cooper) — to recapture some of the old magic.

“You’ll never be the racer you once were,” Smokey intones. “You can’t turn back the clock, kid, but you can wind it up again.”

“Cars 3” is full of surprises, and there’s a nice twist in store well before the finish line.

Preceding “Cars 3” is a short film entitled “Lou.” It’s a charming fable about a playground bully who learns the error of his ways thanks to some enchanted objects in his school’s lost-and-found box.