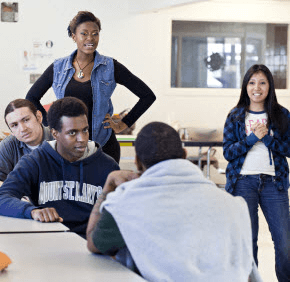 By Maria Wiering
mwiering@CatholicReview.org
Twitter: @ReviewWiering
SABILLASVILLE – Standing in front of the room, Jasmine Duke grabbed the attention of 27 chatting young people by launching into basic Spanish phrases. “¿Cómo estás?” she asked, “How are you?” Fellow students at Mount St. Mary’s University in Emmitsburg answered: “Bien” – good.
It was May 5 – the Mexican holiday Cinco de Mayo – and the Mount student mentors were meeting with their mentees for the last time before their academic year ended. To celebrate the holiday, they were making salsa and guacamole.
Every other Sunday since August, 14 students in two Mount scholars programs have visited residents of the Victor Cullen Center, a secure treatment center for male youths operated by the Maryland Department of Juvenile Services. The Mount students mentor Cullen residents one-on-one, and then engage them in an activity or presentation.
The goal is to provide positive role models to the Cullen youths, said Melissa Alarcon, community services coordinator for the Maryland Department of Justice. She initiated Cullen’s partnership with the Mount, which just finished its first year.
Other youth corrections programs in the state offer similar mentorships with college students.
“It works because we’re able to make a connection to the community,” Alarcon said.
For some juvenile offenders, that connection could lead to college, she said.
“Some of the youths see college as a star in the sky they can’t reach,” she said. “Having (college students) come in makes college more tangible.”
That might be the case for Bobbye, a 17-year-old Cullen resident who said he once didn’t care about finishing high school. After months of working with Duke, his mentor, he plans to take his GED High School Equivalency Exam and apply to college to study law enforcement.
The Catholic Review agreed not to use Cullen residents’ last name in order to protect their privacy.
Knowing Bobbye’s goal means Duke accomplished hers.
“I wanted to positively impact young black males,” said Duke, a senior who is also black. “I wanted to uplift them because they have so much potential.”
All 14 of the program’s Mount participants are Third Century Scholars, students from the Washington, D.C., metro area with demonstrated leadership qualities and financial need; or Native American Scholars, graduates of St. Labre Indian School in Ashland, Mont.
Mount junior Shanice Blanchard, 20, said growing up in northwest Washington gives her common ground with some of the Cullen residents.
“I’ve pretty much been around at-risk youths for a long time, and I know a lot of youths who may end up in the system, or who have gone through the system because of their backgrounds,” said Blanchard, a Catholic who is studying criminal justice and is interested in working with young people.
During the past year she worked with two Cullen residents, both of whom have been released.
“I’ve learned patience … as well as perseverance,” she said. “Sometimes they want to give up (on their homework) and you have to be there to encourage them.”
Sean Davis, also a 20-year-old junior from the Washington area, said volunteering at Cullen challenged his assumptions of juvenile offenders. He calls his experience “eye-opening.”
“We weren’t really sure what to expect,” he said. “The immediate understanding of a juvenile (offender) or convict played a little into our psyché of what we were thinking, but it turned out to be the opposite. They were really open to us, really talented, (and) a lot of fun. I think the Department of Juvenile Services did a good job pairing us up with our mentees.”
The relationships benefit Cullen residents by introducing them to successful minority students, said Troy Stiffler, a group life manager at the facility. He said that when most Cullen residents are released, they go home to face the same situations that led to their arrest. Without new aspirations, they could fall back in bad habits.
“We’re turning them back into the community more prepared than when they came in,” he said. “My hope is for the kids to take advantage of the opportunities that the Mount students put in front of them.”
Cullen accommodates up to 48 youths, ages 15 to 19, who stay six to nine months.
Chianti Blackmon, director of the Mount’s Center for Student Diversity who coordinates the scholars programs, called the mentor-mentee relationship “a win-win” for both Mount students and Cullen residents.
“This gives them (scholars) an opportunity to reach back and talk about how they had someone instrumental in their life, and possibly have in impact on the youths at the Cullen Center and help them make positive decisions,” she said.
Also see:
Calvert Hall principal to retire after nearly five decades at Towson school
Copyright (c) May 11, 2013 CatholicReview.org
PrevNext