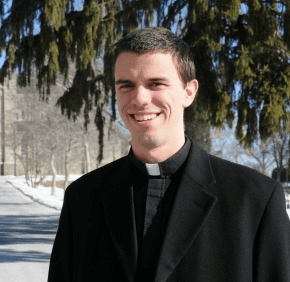 By Elizabeth Lowe
elowe@CatholicReview.org
Eamonn Clark had recently purchased video and sound equipment for personal projects when he chose to use it to create a video for the Archdiocese of Baltimore.
“I decided it would be a good use of my time and my skills to do something for the archdiocese, specifically the vocations office,” said Clark, 22, a seminarian at Mount St. Mary’s Seminary in Emmitsburg who expects to be ordained a priest for the archdiocese in 2019.
The film, “Spes Nostra,” examines the lives of eight seminarians at Mount St. Mary’s, telling the story of their ongoing discernment to serve as priests. It also features faculty members, Father Michael A. DeAscanis, archdiocesan director of vocations, and Archbishop William E. Lori.
“I don’t know of any film like the one I’ve produced,” said Clark, a parishioner of St. Louis in Clarkville. “I wanted to produce something that answered questions and put a good light on priestly vocations. I tried to be realistic with the portrayal of the seminary.”
Mount seminarians raised nearly $6,000 through a Kickstarter campaign to create the film, which cost about $5,000 to produce, Clark said. The remaining $1,000 was invested in equipment for future projects.
Clark, who began filming in August 2012, finished filming and editing in February. The final product is 50 minutes and 28 seconds in length.
Several screenings were held earlier this year at the Mount.
“The final form of the film evolved as I made it,” Clark said. “I had no clue what it would look like.”
The film’s target audience is high school-aged men, Clark said.
“He made a film to try to help other people get a glimpse into the beauty and the goodness of seminary life, as well as help other people to hear the dramatic and inspiring life stories of these seminarians,” Father DeAscanis said.
The film is a testimony to God calling men to the priesthood at any age and in any stage of life, Father DeAscanis said.
“It depicts seminary as a place where men go to be formed – mind, body and soul – into strong Catholic men,” Father DeAscanis said. “Our hope for the Catholic Church in Baltimore and Maryland is that more young men will have the courage and generosity to say ‘yes’ to God’s call to serve as priests, to bring Christ’s ideas and charity and Eucharistic presence to us in Maryland.”
Father DeAscanis expects there will be a screening of the film at Quo Vadis vocations camp, an overnight camp for young men June 29-July 2 at the Mount.
For information about Quo Vadis, click here.
Also see:
Thy will be done … even on the voice
Catholic high school grads ready to make their mark on the world
PrevNext