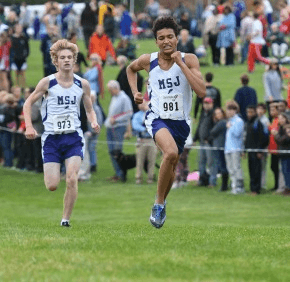 By Paul McMullen
pmcmullen@CatholicReview.org
Twitter: @ReviewMcMullen
STEVENSON – The prayer circle of the Mount St. Joseph High School cross country team grew a little wider Nov. 1.
Coach Phil Turner’s Gaels convincingly repeated at the Maryland Interscholastic Athletic Association championship meet at Stevenson University. That was no surprise after an unbeaten dual meet season in the A Conference, but it was an unsettling day on their campus in Irvington.
Mount St. Joseph sits just west of the scene of the two-bus crash that earlier in the day claimed six lives. The injured on the MTA bus included an employee of Mount St. Joseph’s cafeteria service, whose name the school has not released.

Mount St. Joseph High School cross country coach Phil Turner prays with his team prior to the start of the 2016 Maryland Interscholastic Athletic Association cross country championships at Stevenson University Nov. 1. The team dedicated the race to a school cafeteria worker who had been severely injured in a bus accident that claimed six lives earlier that day. (Kevin J. Parks/CR Staff)
“We see her every day in the cafeteria, and we talked about that in our team huddle,” Turner said. “It was another reminder that you’re not running just for yourself, you’re running for your brothers on this team and the entire Mount St. Joe community. We wanted to dedicate this race to her.”
That unity was most apparent, as the Gaels’ top five all finished within a span of 50 seconds, and all in the top 12 among A Conference runners.
McDonogh’s Dalton Hengst and Lucas Wright finished 1-2, but then came Mount St. Joe senior Alex Whittaker and junior Hunter Petrik. Carter Williams, junior Andrew Brinker and sophomore Gabe Antone finished ninth, 10th and 12th among A Conference runners, giving the Gaels 38 points.
Whittaker’s time over the 3.1 mile course was 16 minutes, 13.5 seconds. Antone’s was 17:03.
Devon Strozy led Calvert Hall to second place in the team chase with 84 points, and Max Barbour led Loyola Blakefield to third with 98.
Williams was the wild-card for the Gaels. He went out with a hip injury in early September, and spent six weeks maintaining his fitness on an exercise cycle in the school’s Smith Center. As Turner explained, Williams was most eager to return to the team concept he has fostered.
“These guys have been running together every day for several years now,” said Turner, in his fourth year as head coach. “They’re what a team should be.”

Mount St. Joseph High School cross country coach Phil Turner celebrates a second consecutive MIAA championship with his runners at Stevenson University Nov. 1. (Kevin J. Parks/CR Staff)
Whittaker noted the contrast between winning a tight contest against Loyola Blakefield in last year’s championship meet, and being the clear favorite this time around.
He followed his brother, Nick, from School of the Incarnation in Gambrills to Mount St. Joseph, but the unity thing only goes so far. Nick Whittaker is studying pre-law at Harvard. Alex’s No. 1 college choice is Yale.
Turner, an English teacher who assists veteran coach Jack Peach in the Gaels’ track and field program, took a curious path to Mount St. Joseph. A Wisconsin native, he ran for American University in Washington, D.C., where his coach was Matt Centrowitz Sr., father of Matt Jr., the gold-medal winning 1,500-meter runner at the Rio Olympics with roots at St. Andrew by the Bay Parish in Annapolis.
At American, Turner had met Danielle Rhinehart, a lacrosse player who had attended Mount de Sales Academy. He pursued a master’s degree in journalism from Northwestern University in Evanston, Ill., before following his heart to her and Baltimore.
“She placed in me the idea to work at Mount St. Joe,” said Turner, who previously spent five years in the Teach for America program in Baltimore.
The Gaels’ fans at Stevenson University included Phil and Danielle Turner’s four children. The Turners worship at St. Philip Neri in Linthicum.
The title came during a monumental week for Mount St. Joseph athletics. On Nov. 2, senior Darryl Morsell committed to continue his basketball career at the University of Maryland. On Nov. 3, the Gaels will host an MIAA A Conference semifinal game against Calvert Hall. On Nov. 5, the football team plays host to top-ranked St. Frances Academy, the only unbeaten in A Conference play.