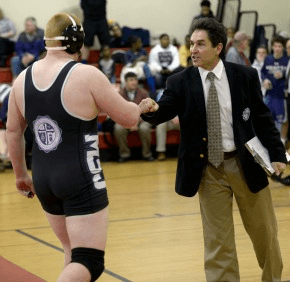 Between 1976 and 1997, the Gaels won 22 straight Lehigh Cups, tournament titles bestowed by the Maryland Interscholastic Athletic Association and its predecessor, the Maryland Scholastic Association. The all-boys school in Irvington wasn’t just dominant locally, as it won 10 team titles at the National Prep championships.

Over the last decade, however, McDonogh won more MIAA titles (six) than Mount St. Joseph (two), which also had to stomach the sight of fellow Catholic high schools, such as John Carroll last year and Archbishop Spalding in 2011, hoisting the team trophy.

Now the Gaels are back on top of the local rankings and taking aim at their first MIAA title since 2010, in a tournament they will serve as host to Feb. 12 and 13. They are in position to do so thanks to concepts with which head coach Harry Barnabae is most familiar: family and legacy.

Mount St. Joseph freshman Jonathan Short pins his 145-pound opponent from Calvert Hall during the Gaels’ 76-5 victory over the Cardinals Feb. 3. (Kevin Parks/Special to the Review)

A parishioner of Holy Trinity in Glen Burnie, Barnabae graduated from Mount St. Joseph in 1977, and won honors on the first two Gaels’ teams to win National Prep titles.

After graduating from the University of North Carolina, Barnabae went into real estate, then got into youth coaching in part to guide his four sons: Angelo, 22, a 2012 graduate of Mount St. Joseph; Alex, a 2015 grad now at Shepherd College; Christopher, an eighth-grader at St. Philip Neri; and Alex, a fourth-grader.

“You have two options when hiring coaches,” said Dave Norton, the Mount St. Joseph principal and a member of its class of 1971. “If you can’t have someone who works in the building, then it helps to have an alum who understands the tradition and wants to be part of a Xaverian institution like Mount St. Joe.

“Mr. Barnabae helped us become a powerhouse in wrestling. He’s wants to continue that legacy.”

Barnabae became the Gaels’ coach in 2011, two years after he founded the MSJ Titans junior league team. Three nights a week, he’ll have anywhere from 90-100 elementary and middle school boys practicing in the Smith Center.

Many of his best come from wrestling families.

Logan Rill, the 195-pounder, is the middle man in his own family’s tradition at Mount St. Joseph. His brother, Keagan, a sophomore, is the Gaels’ 220-pounder. An older brother, Tyler, graduated from Mount St. Joseph in 2012. He’s wrestling for the University of Buffalo, where Logan has been accepted.

Their father starred in the sport for North Carroll High in the 1980s. They live in Hampstead. Why drive past schools like McDonogh to go to Mount St. Joseph?

“I began hearing about the tradition here when my brother (Tyler) was a freshman,” he said. “We talk about that a lot here, and we want to be the team that makes it great again. We’re very close. This is like family.”

The Trybus twins, Cody (120 pounds) and Kyle (126), conversely, knew little of the Mount St. Joseph tradition when they moved as seventh-graders from Erie, Pa., to Cecil County, where their home parish is St. Margaret of Scotland in Glasgow, Del.

They transferred to Mount St. Joseph two years ago to broaden their academic and athletic horizons. During the week, they reside in Pasadena with the family of 132-pounder Shawn Orem. The sacrifice has worked, as the twins expect to enter the U.S. Naval Academy in 2017, after a year at its prep school in Newport, R.I.

The Mount St. Joseph wrestling team includes multiple members of the Rill and Trybus families. (Kevin Parks/Special to the Review)

The Rills, Trubys and 152-pounder Cornelius Schuster were among the leaders who turned the play on words “Gael Force” into the accompanying “Storm is Coming” T-shirts.

“The coaches,” Cody said, “drill it into us all the time, ‘We’re a wrestling powerhouse.’ They tell us stories of when they won, and get us to believe the same thing.”

It’s not just Barnabae telling those stories. His assistants include Alan Smith, who coached the Gaels from 1979-85, when the program produced the likes of Rico Chiapparelli, who became an NCAA champion for the University of Iowa, and Vinny Smith, whose name is on the school’s athletic complex, thanks to a $4 million gift.

Barnabae distributes a brochure that includes Chiapparelli’s record, which is ironic, since none of the seniors interviewed by the Catholic Review could cite their gaudy seasonal records off the top of their head.

“That isn’t what drives them; they’re focused on team goals,” Barnabae said. “That’s the kind of kid we’re attracting to Mount St. Joe, and what I want to build into them.

“The sport of wrestling has enabled me to develop life-long friendships. I truly hope that our wrestlers are capable of doing the same, and when it is their time, they in turn will give back to Mount St. Joe wrestling.”

Angelo Petruccy, an Archbishop Curley High School senior and student intern for the Catholic Review, contributed to this article.