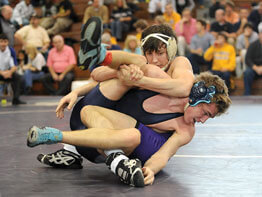 Once again, the McDonogh wrestling team has won the Maryland Interscholastic Athletic Association A Conference championship. This is their third straight championship, as the Eagles sent a total of 10 wrestlers to the finals and seven walked away as champions.

While McDonogh won the title, Mount St. Joe did its best to try to keep up. St. Joe was the runner-up to McDonogh, with Archbishop Curley placing third. Contributing in a huge way for the Gaels was sophomore Bobby Bowman (152) who upset Shane Milam, the favorite heading into the match, by a 3-2 decision.

Bowman, who received “The Outstanding Wrestler” trophy was ecstatic, saying, “Yeah, man, the win felt great. I never have beaten him (Milam) before. I wrestled the way I wanted to and came out on top. I can’t really explain the feeling.”

While he didn’t win his first-round match, Gaels sophomore Gino Pollock understands that the season isn’t over and that St. Joe can still come up big to end their season strong.

“The Maryland State Independent Tournament is next week (Feb. 15- 16), and we definitely want to win there. I feel our team is very talented and, hopefully, we can pull it off and end our season on a very good note,” said Pollock.