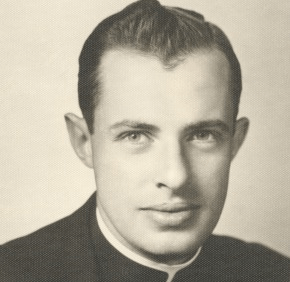 By Maria Wiering
mwiering@CatholicReview.org
“Call me Paul” was a familiar response from Father Paul V. Redmond, longtime philosophy professor at Mount St. Mary’s University and Seminary in Emmitsburg.
The outgoing priest downplayed formalities – including the use of “Father” before his name – in order to connect with people, said Barbara Anderson, pastoral life director of two Frederick County parishes where Father Redmond assisted.
Father Redmond died Oct. 19 at St. Catherine’s Nursing Center in Emmitsburg. He was 87.
“Whenever you would go over to see him, you always left knowing that he loved his students, and he loved the priesthood and he loved what he taught. Somehow, every visit you had with him left you with those three thoughts,” said Monsignor Steven Rohlfs, rector of Mount St. Mary’s Seminary.
Father Redmond was teaching at the university when Monsignor Rohlfs was a student there in the 1970s. He was known to be a good confessor and spiritual director, he said. As a professor, Father Redmond invested considerable time to ensuring his students understood his courses’ content.
“He would always get you to like him first, then you would listen to what he said about philosophy or theology,” Monsignor Rohlfs said of Father Redmond’s teaching style.
Father Redmond was born to Jerome V. and Nona (Sullivan) Redmond in Albany, N.Y. He attended Catholic schools, including high school seminary, in Albany and Rochester. He also earned several degrees, including a licentiate in theology, from The Catholic University of America in Washington, D.C.
Father Redmond was ordained for the Diocese of Albany in 1954, and served as an assistant pastor in Rensselaer, N.Y., before joining the faculty of then Mount St. Mary’s College in 1955 to teach philosophy and serve as dean of students.
He would later serve as department chair of theology and philosophy, and university vice president.
He was promoted to full professor in 1981 and became professor emeritus in 1992. He retired in 1997.
Father Redmond was the last surviving member of the Council of Priests, the university’s former governing body.
He was known for hosting luncheons, guests and opera nights, and frequently presided over students’ weddings and their children’s baptisms.
Patrick Nield, a 1989 Mount graduate, said that Father Redmond took a holistic approach to his students’ education. Nield took three of his philosophy classes and served one year as a resident advisor in a residence hall where the priest lived.
“I joked that I was his R.A.,” he said.
The two stayed in touch, and “shared milestones,” Nield said. The priest married him and Susie in 1992. He baptized four of their five children and blessed their house. The Nields also named their first child after him.
In the months before he died, their visits included discussion about Nield’s family and the books Father Redmond was reading.
“He had an openness to God’s love, and the acceptance of things we can’t control,” Nield said.
Mount President Thomas Powell named April 24, 2014, “Father Paul Redmond Day,” which included the dedication of the Reverend Paul V. Redmond Seminar Room in the university’s library. The celebration included a Mass in the campus Chapel of the Immaculate Conception. Presiding was Father Redmond’s friend Archbishop Emeritus Harry J. Flynn of St. Paul and Minneapolis.
Father Redmond assisted with weekend Masses at St. Mark Parish in Catonsville for seven years in the late 1960s and early 1970s. He also assisted at St. Anthony’s Shrine in Emmitsburg and Our Lady of Mount Carmel in Thurmont until 2011. There he was known for his “little commercials,” where he recommended books and movies to parishioners at the end of Mass. He encouraged them to read the Harry Potter series, in which he saw Catholic undercurrents, and the works of Jesuit Father James Martin.
Father Redmond characteristically greeted everyone with “Hello, friend,” Anderson said. He often asked her what more he could do to help the two parishes. He was homebound for a few years before moving to the nursing center, Anderson said, but he would often invite parishioners to his home on the Mount’s campus for Mass or confession.
Anderson will miss his “downhome, folksy kind of style,” she said. “He was a very educated man, but he didn’t put on airs. He didn’t speak down to people.”
Services
A scriptural wake service and eulogies will be offered Oct. 23 from 4:30-8 p.m. at the Chapel of the Immaculate Conception at the Mount. A funeral Mass will be offered at the Chapel of the Immaculate Conception Oct. 24 at 10 a.m. Father Thomas Connery, a priest of the Diocese of Albany and a longtime friend, will be the main celebrant.
In lieu of flowers, contributions may be made to the Nona S. and Jerome V. Redmond Memorial Scholarship Fund at Mount St. Mary’s University. Father Redmond established the philosophy scholarship in honor of his parents.
To see more obituary articles, click here.
PrevNext