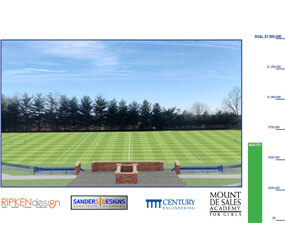 CATONSVILLE – When Beth Saverino was a Mount de Sales Academy student during the 1980s, she said students heard rumors of the Catonsville school closing.

Now as the development director of the Catonsville school, Saverino said the buzz is about growth.

“When you look at Mount de Sales, we’re in a period of what I call transformation,” Saverino said.

With students, staff and supporters looking on Dec. 2, Mount de Sales officials unveiled plans to replace the current grass athletic field with a regulation-sized turf field. In addition to the field, bathrooms, storage areas and other amenities will be added.

Nora Coakley Reiter, the president of the board and a member of the class of 1970, said the field is badly needed.

The field will serve soccer, fielder hockey and lacrosse teams in addition to physical education classes.

The $1.2 million project is the second part of a three-phase, $15.5 million capital campaign. More than $620,000 has been raised for the athletic field through donors. Construction is expected to begin at the conclusion of this school year, with the debut of the new field to take place in the fall of 2012.

Among the companies working on the field: Ripken Design, Sanders Designs and Century Engineering.

The first phase of the capital campaign saw air conditioning installed in the school and a convent built on campus for the Dominican Sisters who administer Mount de Sales.

School officials said the third phase is targeting the construction of a fine arts center.

“Nobody thought we’d be able to get through phase one or phase two,” said Joseph Geier, vice president of the school’s board of trustees.

Mount de Sales has about 500 students and is filled to capacity. Coakley Reiter said the school’s phenomenal growth is due in large part to the Dominicans’ leadership. Currently, there are six members of the order on campus and the convent, finished last school year, is built for 12 sisters.

Added Frank H. Falter, another board member and parent of two Mount de Sales graduates, “Without them, this never would have happened.”

Dominican Sister Anne Catherine Burleigh, principal, said the school’s success is a result of a partnership.

For more on this story, visit CatholicReview.org/palmerblog this week.