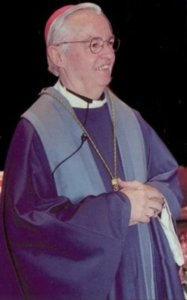 Philip Francis (Frank) Murphy was born on March 25, 1933 in Cumberland, Maryland to Philip A. and Kathleen E. (Huth) Murphy. He attended St. Mary’s School in Cumberland and St. Charles High School and College in Catonsville. He received a Bachelor of Arts degree from St. Mary’s Seminary in Baltimore. He set sail from New York aboard the Andrea Doria in 1955, bound for Rome and the further study of theology.

Frank was ordained a priest by the Most Reverend Martin J. O’Connor, D.D. in the North American Chapel in Rome on December 20, 1958. In 1959 he completed his studies, receiving a License in Sacred Theology degree from the Pontifical Gregorian University in Rome. He returned to Baltimore shortly thereafter and was appointed Associate Pastor of St. Bernardine Parish in Baltimore with additional duties as Vocation Director at Mt. St. Joseph High School. He returned again to Rome in 1961 and served at the North American College as Assistant Vice Rector. A favorite memory of his from those years was of standing in St. Peter’s Square on October 11, 1963 at the opening of the Second Vatican Council. In 1965 he was appointed Papal Chamberlain with the title of Very Reverend Monsignor. He was also appointed Priest Secretary