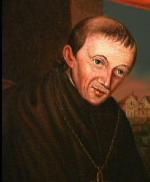 Leonard Neale was born on October 15, 1746, the son of William and Anna (Brooke) Neale, in Port Tobacco, Maryland, located in Charles County. His father is a descendent of Captain James Neale who emigrated to Maryland in 1642. Archbishop Neale attended Bohemia Manor School near his home in Maryland. Like his four priest brothers, he realized his calling at an early age and entered St. Omer College in Northern France. He joined the Society of Jesus in Liege, the Lowlands and continued his studies at the Jestuit House of Studies at Bruges and Liege. In 1773 he was a member of the faculty of the Jesuit College of Bruges when the institution was seized by the Austro-Belgian goverment and was expelled with the other Jesuits at the College. After this, he spent the next four years engaged in pastoral ministry in England. While in England he petitioned for a foreign mission. This petition was granted, and in 1779 he was assigned to Demerara, in British Guiana, South America. However, his poor health made it difficult, so in 1783 he returned to the United States.

Upon returning to the United States, Archbishop Neale found himself engaged in pastoral work in Maryland and Pennsylvania. In 1793 he was named pastor of St. Mary Church in Philadelphia, Pennsylvania. He was also appointed Vicar General for Pennsylvania and the other northern states by Bishop John Carroll. In 1799 he was appointed fourth President of Georgetown College in Washington, D.C. He remained President of Georgetown College until 1806. He was also Director of the Visitation Nuns and Poor Clares.

In 1795, Bishop Graesel was appointed Coadjutor of Baltimore. He died before his consecration, so on March 23rd Neale was selected to take his place. The nomination was confirmed by Pope Pius VI on April 17, 1795 although it took several years for the Bull to reach Baltimore. Finally, on December 8, 1800, he was consecrated by Bishop John Carroll. Archbishop Neale was the first bishop to be consecrated within the bounds of the United States.

Archbishop Neale was promoted to the metropolitan See of Baltimore on December 3, 1815, after the death of Archbishop Carroll. On November 19, 1816 he received the Sacred Pallium. At this time, Archbishop Neale was almost 70 years old and spent most of his time in Georgetown. He petitioned the Holy See for the establishment of a monastery at Georgetown, and his petition was granted. The Order of the Visitation of the Blessed Virgin established its monastery in Georgetown. With his health failing, Archbishop Neale asked the Holy Father to elect Bishop de Cheverus of Boston as his coadjutor, but Bishop de Cheverus objected to the request and Rev. Ambrose Marechal was selected instead.

Archbishop Neale died on June 18, 1817 at the age of 69. He was buried in the chapel of the Convent of the Visitation in Georgetown, of which he was the founder.

Source: The Encyclopedia of Catholic Bishops in America 1789-1989, Volume II.