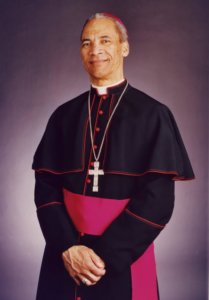 Bishop John H. Ricard, S.S.J. was born on Feb. 29, 1940 in Baton Rouge, Louisiana. He was one of eight children. After attending elementary and high school in Baton Rouge, he moved to New York to attend Epiphany Apostolic College in Newburgh. He completed his theological studies at St. Joseph Seminary in Washington, D.C. Postgraduate work includes a Master’s Degree from Tulane University and a Doctoral Degree from the Catholic University of America.

He joined the Baltimore-based Society of St. Joseph of the Sacred Heart (Josephites) in 1962, took his final vows on June 1, 1967 and was ordained to the priesthood on May 25, 1968 by Bishop Emmet Tracy of Baton Rouge.

Bishop Ricard was appointed a vicar bishop of the Archdiocese of Baltimore by Pope John Paul II. He was incardinated and consecrated Auxiliary Bishop of Baltimore on July 2, 1984.

In March 1997 Pope John Paul II appointed him Bishop of the Diocese of Pensacola-Tallahassee. Bishop Ricard served as chairman of the U.S. bishops’ Subcommittee on the Church in Africa and has served on the bishops’ international justice and peace committee and the national collections committee.

He retired March 11, 2011, for health reasons and returned to ministry with the Josephites. Bishop Ricard most recently served as rector of his religious society’s St. Joseph’s Seminary in Washington, D.C. and as president of the National Black Catholic Congress. In 2019, he was elected superior general of the Josephites.