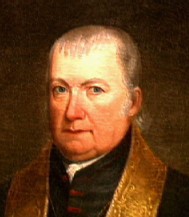 James Whitfield was born in Liverpool, England on November 4, 1770, the son of James and Ann (Genders) Whitfield. After his father’s death, James and his mother traveled to Italy hoping that the warmer climate would be better for her health. During his return to England, they were detained in Lyons, France by one of Napoleon’s embargoes against the English government. It was during this time in Lyons that Whitfield met Rev. Ambrose Maréchal, S.S., who invited him to study at the Sulpician Grand Seminary. Whitfield accepted the invitation, and was ordained to the priesthood by Bishop Claude Simon of Genoble on July 24, 1809 in Lyons. After his ordination he returned to England, and in 1811 was assigned to St. Mary Chapel near Liverpool, England. While he was ministering at St. Mary Chapel, he received an invitation from Maréchal, the newly appointed Coadjustor Bishop of Baltimore, to come to America. He accepted this invitation, and in Spetember 1817 Whitfield arrived in Baltimore. He became engaged in pastoral work first as Assistant at the Cathedral of Baltimore, then later as Rector of the Cathedral. He was named Vicar General of the Archdiocese of Baltimore in 1818, a position he held for 10 years. During his ministry in Baltimore, he worked for the welfare of the African-American community.

On January 8, 1828, Whitfield was appointed Coadjutor of Baltimore by Pope Leo XI