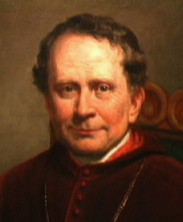 Francis Patrick Kenrick was born in Dublin, Ireland, on December 3, 1797, to Thomas and Jane (Eustace) Kenrick. He was educated at the Urban College of the Propaganda Fide in Rome and ordained a priest on April 7, 1821. He volunteered to serve in the Diocese of Bardstown, Kentucky, in response to an appeal from Bp. Benedict Flaget, S.S., for professors to staff his new seminary and college, St. Joseph’s, in Bardstown. For the first five years, Kenrick taught Greek and history at the college and all of the theology courses at the seminary. His duties expanded when Bp. Flaget requested that he travel around the diocese to conduct missions and present public lectures on the Catholic Church. He soon earned a reputation as an eloquent preacher and an effective apologist. He later served as the bishop’s secretary and served as his theologian at the First Provincial Council of Baltimore in 1829.

Kenrick was a recognized theologian, scripture scholar, and apologist who authored numerous works. His writings include a defense of the Real Presence in Letters of Omega and Omicron (1828) and The Primacy of the Apostolic See and the Authority of General Councils Vindicated (1837), Theologia Dogmatica (1839), and The Historical Books of the Old Testament (1860). His most important work, however, was his English translation of the New Testament, with annotation, published in six volumes between 1849 and 1862.

Kenrick was appointed coadjutor of the Diocese of Philadelphia with right of succession in 1830 and became bishop in 1842. The boundaries of the diocese at that time included the entire states of Pennsylvania and Delaware and southwest New Jersey. In 1835 he proposed separating western Pennsylvania into a new diocese at Pittsburgh. During his years in Philadelphia, he established himself as a disciplinarian and builder. He implemented the decrees of Baltimore’s Provincial Councils and brought resolution to the controversy surrounding the trustee system, which had been ongoing since the end of the eighteenth century. The diocese grew dramatically during Kenrick’s episcopacy. From 1830 to 1850 the number of churches grew from 22 to 92; priests from 35 to 101; charitable institutions from two to six; the Catholic population from 35,000 to 170,000. His greatest educational accomplishment was the establishment of a free parochial school system attached to almost every parish.

He became archbishop of Baltimore in 1851 and presided over the First Plenary Council of Baltimore in 1852. The council made binding on the U.S. Church the decrees of all the provincial councils of Baltimore, urged the establishment of parish free schools, and use of the Roman Ritual. Triennial provincial councils were held in 1855 and 1858 and diocesan synods in 1853, 1857, and 1863. The synods addressed administrative, disciplinary, and devotional matters relating to Baltimore and reflected his efforts to bring order to the administration of the archdiocese and regularize procedures. In 1858 he established the Forty Hours Devotion in the Archdiocese, a devotion first introduced in this country by his successor in Philadelphia, St. John Neumann. In 1854 he was invited by Pope Pius IX to attend the promulgation of the doctrine of the Immaculate Conception in Rome. He died on July 8, 1863.