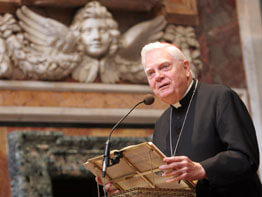 WASHINGTON – Following the Jan. 5 retirements of 78-year-old Cardinal Adam J. Maida of Detroit and Bishop John J. McRaith of Owensboro, Ky., up to 27 more U.S. bishops, including three cardinals, could retire because of age this year.

There are 16 active U.S. bishops, including three cardinals, who have already turned 75. Eleven more will celebrate their 75th birthday in 2009.

At age 75 bishops are requested to submit their resignation to the pope.

Cardinal Bernard F. Law, archpriest of St. Mary Major Basilica in Rome and a cardinal since 1985, turned 75 Nov. 4, 2006. A former bishop of Springfield-Cape Girardeau, Mo., he was archbishop of Boston from 1984 until his resignation from that post in 2002 in the wake of controversy over his handling of cases of clergy sex abuse there. He was named to his Rome post in 2004.

Following a tradition begun by Pope John Paul II, Pope Benedict XVI often has asked cardinals to stay on the job after they reached the age of 75. Even when a cardinal retires in his 70s, he remains an active member of the College of Cardinals, eligible to enter a conclave and vote for a new pope, until age 80.

The 13 other active U.S. bishops who are already 75 and the dates of their 75th birthday are:

– Bishop Manuel Batakian of the Eparchy of Our Lady of Nareg in New York for Armenian Catholics; Nov. 5, 2004.

The 11 currently active bishops who will turn 75 in 2009 and their birthdays are: