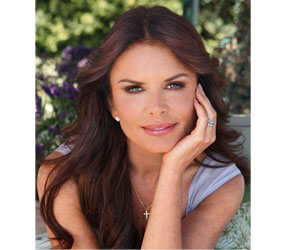 WASHINGTON – Just when you might have forgotten about the family-friendly television series “Touched by an Angel,” series star Roma Downey is tweaking the concept.

Downey, a Catholic, has created a DVD animated series called “Little Angels.” The premise is that twin siblings are visited by eight child-size angels who are ordinarily stuck on the walls of their bedroom but who come to life after the twins’ mother tucks the kids in for the night. The angels take the children on life-lesson-learning adventures. Downey provides the voice of the children’s mother.

“Having played an angel so long on ‘Touched by an Angel,’ I shouldn’t be surprised” about being involved in a new angel-themed project, Downey said in a telephone interview with Catholic News Service from her home in Southern California. “It’s always been about God’s love. It beats at the center of my own heart.”

The adventures the Little Angels take twins Alex and Zoe on link the problems that wee ones encounter with Bible stories. Downey said one such story involves a boy frustrated at not being able to tie his shoes, but the angels take him back to the time of Noah to learn a lesson in how to persevere.

When she was a working mother, Downey said, “I was able to sit them (the children) down in front of a DVD because I had to deal with a plumber or a gardener or something. Wouldn’t you rather they were sitting down in front of something that feeds not only their mind but their heart, and for a loving God?”

Currently, there are two DVDs and two companion CDs available on the Little Angels website, www.littleangels.com. Downey said she expects to expand those offerings in 2012.

“Little Angels” is just the first offering of Downey’s own production company, Light Works. The next effort is decidedly more ambitious: a 10-hour miniseries on the Bible.

“We have only 10 hours. I wish we had ten hundred hours,” Downey told CNS, noting that the miniseries will cover from “Genesis through Revelation.” Although she is still looking at scripts, she said plans call for the miniseries’ debut on Easter in 2013 on the History cable channel, with future episodes on successive Sundays. “It’s a herculean task, which is thrilling – thrilling and terrifying and humbling, so keep us in your prayers,” she said.

Downey has a brother, John, who is a priest in her native Northern Ireland. “We call him Father Brother,” she said, adding that her 15-year-old daughter, Riley, is preparing for her confirmation in 2012. The teen’s godfather, Downey said, is another priest, Father Paddy Kane, who also hails from Northern Ireland, and who recently paid a visit to Downey and her family.

Downey said her first name is a combination of “Rose” and “Mary,” the names of her grandmothers. She said her parents wanted to have her baptized as Roma, but the priest would not permit it since there was no saint named Roma. “I’ll christen her Rose Mary and you can call her whatever you like,” the priest said. “And they did,” she added.

When Downey decided to become an American citizen, she took advantage of a line on one of the forms she had to fill out that allowed her to legally change her first name.

A man working at “the government building in Los Angeles” summoned her to his desk after he reviewed the form, she recalled.

“He just about fell off his chair.”