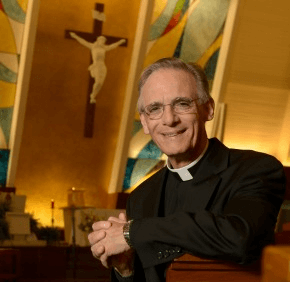 By Erik Zygmont
ezygmont@CatholicReview.org
BEL AIR – Speaking with Monsignor G. Michael Schleupner, “you really get the sense that he’s listening to what you’re saying,” said Bob Bugle, a parishioner of St. Margaret in Bel Air for 18 years.

Such a statement might be dismissed as a platitude, but its truth was apparent when Monsignor Schleupner discussed the decision-making process behind his impending June 30 retirement.

“Probably about four years ago, a man in the parish … he said this thing to me: ‘You’ll know when it’s time,’” the monsignor, who turns 70 on Aug. 23, recalled.

He didn’t know what the man meant then, but rather than discard his words, he kept them in his head until he found out.

Once he did, Schleupner recalled the advice of another layperson: “It’s very important to retire to something and not just retire from something.”

Part of that was taken care of for him.

After 10 years as pastor of St. Margaret and 44 years a priest, the monsignor received official notice in late April from Baltimore Archbishop William E. Lori that his request to retire had been granted.

“Soon after, I got another letter asking me to serve on a committee for the pastoral planning process,” Monsignor Schleupner laughed, referring to process initiated by the archbishop’s pastoral letter, “A Light Brightly Visible: Lighting the Path to Missionary Discipleship.”

The task should suit Monsignor Schleupner well, though, according to his St.Margaret parishioners, many would.

“One of the things that impresses me so much about him is just how broad his area of expertise is,” said Russell LaGreca, a lifetime parishioner who also serves on the finance committee.

Growing up in Northwood a parishioner of St. Matthew and student at the parish elementary school, Monsignor Schleupner attended minor seminary and two years of college at the former St. Charles Seminary College in Catonsville before completing his seminary training at Mount St. Mary’s Seminary in Emmitsburg.

After his ordination – May 20, 1972, by Cardinal Lawrence J. Shehan – Monsignor Schleupner served as associate pastor at Immaculate Heart of Mary in Towson and St. Joseph in Fullerton.
He credits the pastors of those parishes – Monsignor Arthur W. Bastress and the late Father Raymond W. Gribbin, respectively – with helping him develop the pastoral qualities that his parishioners say they will miss.
Monsignor Schleupner recalled that Monsignor Bastress – still active today as pastor of the Shrine of St. Alphonsus in Baltimore and a priest for 66 years – was “willing to take some risks, and he allowed me to take some risks in how I did youth ministry.”
Monsignor Schleupner’s challenge in those days was reaching the so-called “street kids,” who may have been involved with drugs and were not known to darken doors of CYO dances and other standard activities.
He built up trust “little by little,” even visiting one youth in jail. With Monsignor Bastress’ approval, he opened a drop-in center in the parish basement.
“We met with a lot of success,” Monsignor Schleupner said, noting that many of the kids “got their bearings.”
After his two associate pastorships, the monsignor, then 32, was surprised by Archbishop William D. Borders, who asked him in 1978 to serve as chancellor of the archdiocese.
“He gave me a year to get ready,” Monsignor Schleupner said.
He used the time to obtain a master’s degree in church administration from The Catholic University of America in Washington.
During his chancellorship, he continued his studies, earning a licentiate in canon law.
All told, Monsignor Schleupner served nearly two decades at archdiocesan headquarters, first as chancellor from 1979 to 1988, and then as head of finances until 1998.
During those years, he got to know Sister of Notre Dame de Namur Rosalie Murphy, then serving as director of what is now the archdiocesan Division of Planning and Council Services. She died Sept. 12 at 90.
“She was just a great, great influence on me and a holy woman in the best sense of the word,” Monsignor Schleupner said. “She was both gentle and strong; she was rooted in the church and at the same time visionary.”
Like Monsignor Schleupner, Sister Rosalie was an Archbishop Borders recruit, and the prelate, who died in 2010, once described her to the Catholic Review as having “leadership skills with the capacity to listen well,” as well as “the patience to endure difficulties in arriving at consensus.”
It may not be a coincidence that today’s St. Margaret parishioners describe Monsignor Schleupner the same way.

“He’s always taking into consideration the opinions of a diverse group of people,” noted Michelle Sullivan, a 24-year parishioner currently serving on the board for St. Margaret School. “He serves as if he’s leading a community of faith versus ‘it’s his parish.’”

Monsignor Schleupner began his ministry at St. Margaret 10 years ago, after he served at St. Francis de Sales in Abingdon, his first assignment after his two decades at archdiocesan headquarters.
“I felt so blessed here that we weren’t, number one, in an issue of survival, and, number two, that there’s a wealth of talent here,” he said of St. Margaret.
In 2014, the parish completed a much-needed infrastructure overhaul as well as liturgical improvements, including a 14-foot crucifix, stained-glass skylight and a sanctuary wall refinished in faux gold leaf.
Monsignor Schleupner added that he is also grateful to have contributed to something less tangible at the thriving parish, which last month celebrated 172 first Communions.
“I believe there’s a good spirit in this community,” he said. “I guess mean a sense of comfort, a sense of community, of oneness, and, I think, a sense of spirituality.”
Spirituality has always been the core of Monsignor Schleupner’s ministry, and that won’t change upon his retirement. In addition to his archdiocesan committee work and offering assistance at two parishes – most likely one in Baltimore City and one in Harford County, he said – he will continue his “Inbox Inspirations,” a modest online ministry he launched during Lent in 2012 in which he sends out midweek email reflections.
“My intention is to continue that in retirement and perhaps expand it to twice a week,” Monsignor Schleupner said.

He hopes to offer spiritual mentorship at the Caritas Counseling Center in Towson, a recently opened service of the Silver Spring-based St. Luke Institute.

Whether continuing his ministry, having Thanksgiving dinner with his brother’s family or engaging in one of his favorite activities – hiking – he will keep in mind his favorite quotation from scripture, “Walk humbly with the Lord,” from the Book of Micah.
Also see: