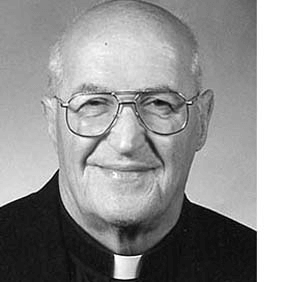 By Matt Palmer
mpalmer@CatholicReview.org
When Father George J. Gannon arrived as an associate pastor at Sacred Heart of Mary in Graceland Park in 2006, it was so that he could learn to succeed Monsignor Richard E. Parks, who had been at the parish for 24 years at the time.
It was a formidable task, as Monsignor Parks was beloved in the Graceland Park and Dundalk communities.
“Someone asked me,” Father Gannon said,  “ ‘How are you going to do with a pastor who was ordained five months before you were born?’ I told them I met a friend who just happened to be ordained five months before I was born.”
That friendship continued until Monsignor Parks died Feb. 19 at the age of 80 after a yearlong struggle with lung cancer. A reception of the body was to be held Feb. 24 at Sacred Heart of Mary from 12:30 through the evening. A funeral Mass at the parish was to be held Feb. 25 at 11 a.m.
“He was always very supportive in helping me learn the ropes,” Father Gannon said. “Even after he left, he was always around.”
Monsignor Parks, a Baltimore native, attended St. Charles College. He then attended seminary at St. Mary’s on Paca Street and St. Mary’s Seminary and University in Roland Park. Ordained on May 23, 1959 at the Basilica of the National Shrine of the Assumption of the Blessed Virgin Mary, he became a prelate of honor monsignor 40 years later.
In the years in-between, Monsignor Parks crafted a well-earned reputation as a caring clergyman who embedded himself in his parish communities. He served as associate pastor in Baltimore City’s St. Jerome from 1959 to 1968, before moving to St. Luke in Edgemere. Two years later, he would have his first experience at Sacred Heart of Mary and would serve as an associate pastor for six years there.
In 1977, he became pastor of Holy Cross parish in Federal Hill before returning to Sacred Heart of Mary in 1982 as pastor.
“He always cared,” Father Gannon said of his predecessor. “He would do anything he could to help somebody. He always made you feel important. No matter who you were, you were the most important person in the world.”
Under Monsignor Parks, Sacred Heart became the bedrock of the tight-knit, family-driven Graceland Park community. The parish school, which was closed as part of archdiocesan consolidations in 2010, thrived because of his support.
Sacred Heart of Mary was the spiritual heart of the neighborhood, thanks to Monsignor Parks’ leadership.
“The life of the parish was his life,” Father Gannon said. “He gave his life to the priesthood. As I’ve learned over the course of the six years I’ve been here, the parish was his life.”
For decades, Monsignor Parks also celebrated Masses at an annual Polka festival in Ocean City. Polka was a deep love of the Sacred Heart community that he supported.
He told The Catholic Review in 2007 of Sacred Heart: “I found a happy home here, and I hit it off with the people.”
Monsignor Parks, in his pastor emeritus role, remained active at Sacred Heart of Mary. Just days before his death, he helped celebrate a funeral for a longtime parishioner.
Despite his cancer struggle, Monsignor Parks was eating at local restaurants, assisting at St. Rita’s in Dundalk, driving and going to the store. Many parishioners saw him moving about in his final days. They knew of his illness, but were shocked and saddened to hear at Mass Feb. 19 that he died. He appeared so vibrant when they saw him.
“That was his love of life,” Father Gannon said of Monsignor Parks remaining active. “That was his love of people.”
PrevNext