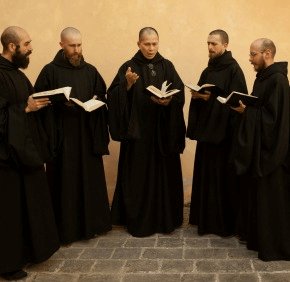 WASHINGTON – Once again the hills are filled with the sound of music, only this time the music soars from Benedictine monks rather than the Von Trapp Family.

In Norcia, Italy, about 70 miles northeast of Rome, there is an international community of monks who operate a craft brewery and spend hours a day chanting the Mass and the Divine Office.

“It’s part of the air we breathe,” said Father Cassian Folsom, who founded the community. “There’s a lot of pollution in our world, and so the pure oxygen of Gregorian chant is like a breath of fresh air.”

Sacred music had not been sung by monks in Norcia in nearly 200 years, until 1998 when the community was brought back by Father Cassian.

Norcia is the birthplace of St. Benedict, the founder of the Benedictine Order.

Two-thirds of the monks are from the United States. Others come from Brazil, Canada, Germany, Indonesia and Italy. The community currently has inquiries from men in Denmark and Poland. International communities provide beneficial growth and formation to its members and are becoming more common because of globalization.

“Living with people of different cultural and linguistic backgrounds is a living witness of the universality of the church, and an opportunity for mutual enrichment,” Father Cassian told Catholic News Service in an interview via email.

The monks of Norcia are inviting their friends from around the world to participate in their prayer through their recording, “BENEDICTA: Marian Chant From Norcia,” a sacred music CD centered on the theme of the life of Mary — the various stages of her life as celebrated in the Catholic Church’s liturgy.

The CD, with an official release date of June 2, is being distributed by Decca/Universal Music Classics.

“We decided to do a Marian CD, because our monastery is dedicated to Our Lady Seat of Wisdom, and we know that many of our friends share our devotion,” Father Cassian explained.

The album includes 33 songs, one of which is an original composition titled “Nos Qui Christi Lugum,” composed by Father Basil Nixen, the choirmaster.

“The image used in the title, ‘Christi Iugum,’ is from the Rule of St. Benedict, which describes the monk as one who bears the yoke of Christ — like a good ox who puts his whole weight into the work at hand,” Father Cassian told CNS.

The monks were contemplating recording an album for a while because “monastic time is slower than regular time,” when De Montfort Music approached them, and they “began a very fruitful collaboration.” The monks teamed up with 11 time Grammy Award-winning producer Christopher Alder and Grammy-winning engineer Jonathan Stokes.

In a culture that more and more seems to favor pop songs and passing trends, with many listeners who may be more interested in Taylor Swift’s newest single than Gregorian chant, one might wonder how a CD of sacred music will be received in the U.S.

In Father Cassian’s view, pop songs are “frosting on a cake, great for your sweet tooth, but you can’t eat frosting as a steady diet.”

He emphasized that passing trends truly are passing, prompting thoughts about things that endure. He described “BENEDICTA” as “timeless” and “enchanting,” and said that “our hearts long for these things, even in our contemporary culture.”

“The chant is beautiful, and our souls need beauty in order to grow and thrive. The chant is the church’s love song to her Lord; it expresses the love-longing of the monk’s heart,” he said.

Whether you listen to the CD as an introduction to Gregorian chant, or as a way to immerse yourself into the monastic life lived by the 18 men in Norcia, Italy, the monks hope this chant will give spiritual nourishment to all who listen.

Editor’s Note: More information about the monks’ CD can be found here.

Fewer take up pipe organ, but its place as ‘voice of church’ secure

Voice from Assisi ‘opens door from heaven’ for city schoolchildren