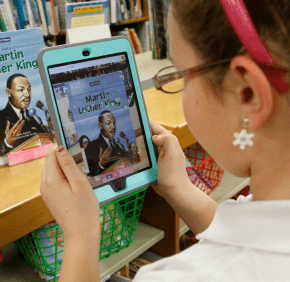 By Mary K. Tilghman
Special to the Review
WESTMINSTER – St. John Catholic School opened its doors in the fall of 1866, with the School Sisters of Notre Dame on hand to teach catechism, reading, writing and arithmetic.
A lay board runs the school and the all-important basics have new partners: technology and real-world learning.
Updated technology includes iPads in the classroom and online communication between students, teachers and parents. After school, the Robotics Club and the Business of Books Club join extracurricular standards, such as band and sports.
“In an effort to bring the school up to and beyond current standards, we started improving the technology program several years ago,” said Deborah Kennedy, its advancement director.
Andy Yingling, a St. John alumnus and the school’s tech teacher, helped evaluate the technology program, where he found computer time was limited to the Tech Lab and Wi-Fi access was minimal.
Now iPads are used by every student in grades five to eight. All students, their teachers and parents are connected on line to monitor assignments and progress.
Reading classes in first and second grade use iPad Minis to complete assignments. And the school’s Wi-Fi can handle 225 devices at any time, according to Yingling.
“So far, we’ve had great experiences,” Kennedy said.
The Tech Lab, filled with desktop computers, boasts two 3-D printers (it’s one of 30 Catholic schools in the archdiocese blessed with one). It’s the meeting space for the school’s Robotics Club. Begun last fall, it was the idea of David Magaha, a software engineer and father of fifth-grader Christopher. Offered to grades five to eight, students build Lego robots while improving problem-solving and team-building skills, said Magaha, who with Kennedy, Yingling, and parent volunteer Matt Rudesill, guides the club’s 18 members.

Dominic Bechtel watches fellow seventh-grader Eric Maglietta design a program for a Lego robot during a meeting of the Robotics Club at St. John School in Westminster Jan. 7. (Bill Ryan/Special to the Review)

The Robotics Club got off to a good start, winning accolades for a project in statewide competition.
Magaha said the club is filled with clever young programmers. In the beginning, he helped them step by step, but, he said, “By the end of the year they were showing me things they were doing.”
Although neither team qualified for the next round of state competition this academic year, the team comprised mostly of fifth-graders placed highest in one of the three categories for their textile recycling project, according to Magaha. More importantly, he noted, the students want to continue on through the rest of the school year.
“I was amazed at the creativity the children were able to bring into this,” said Kennedy, whose son, Shea, a fifth-grader, is a club member.
Another group of creative students is organizing the school’s book fair. The Business of Books Club’s 14 fifth- and sixth-graders work weekly on marketing, sales and merchandising of the Scholastic Book Fair to take place during Catholic Schools Week.
“My goal is for the kids to run it (the book fair) as much as possible,” said Mary Ann Saccone, a substitute teacher who runs the club.
The students have designed posters and written announcements to post online. They’re learning about sales and customer service, and how to set up the book fair in the library. They’ll help customers and put everything away once the fair is over, Saccone said.
“It’s giving them a feel for how to run a business,” she said.
With every new tool and activity, Yingling said he sees new enthusiasm among the schoolchildren.
“It excites them,” he said.
It’s a good start for St. John’s next 150 years.