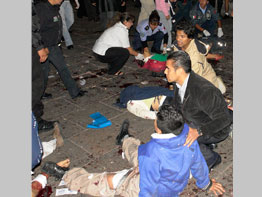 MEXICO CITY – Independence Day festivities turned violent in the state of Michoacan as three grenades were tossed during the governor’s annual performance of the “grito,” a popular re-enactment of Father Miguel Hidalgo Costilla’s call for independence.

Michoacan Gov. Leonel Godoy Rangel said Sept. 16 that the previous day’s attacks in the state capital Morelia left at least three dead and 50 injured in the western state, which in recent years has been rife with organized-crime violence related to drug trafficking. Mexico’s Reforma newspaper put the 2008 death toll from organized-crime-related violence at 156 in Michoacan and 3,148 nationwide by mid-September.

The attacks came barely two weeks after Mexicans flooded the streets of cities across the country, calling for an end to a rash of kidnappings and organized-crime-related violence. They also happened during the country’s most important civic holiday, which has become politicized heavily in recent years due to the refusal of the 2006 election runner-up to concede defeat and recognize the legitimacy of President Felipe Calderon’s administration.

Catholic officials recently expressed dismay at the increasingly divisive nature of the independence day holiday. The Mexican bishops’ conference issued a message Sept. 11 calling on all Mexicans to celebrate jointly, regardless of partisan persuasion.

“Now is not the time for divisions; Mexico deserves something more,” said the message, titled “The Divided Grito.” “May we shout, newly united, for an independence that gives us peace, security and progress,” it said.

The bishops’ message rejected the use of the grito for partisan and political ends.

“Apart from the ideological and partisan feelings, we must leave aside speaking of ‘legitimate’ and ‘illegitimate,’“ the message said, referring to the country’s presidential politics. “We have an institution that is the presidency of the republic and leading it is a constitutional president.”

In Mexico City, Calderon – a Michoacan native who sent the military to confront narcotics traffickers in his home state almost immediately after taking power in December 2006 – appeared Sept. 15 on the balcony of the National Palace, a colonial-era building overlooking the expansive Zocalo, or main square, in the capital, and yelled “Viva Mexico!” the defining act of Mexico’s independence celebrations.

The annual grito usually is performed by the president in the Zocalo.

But Andres Manuel Lopez Obrador, Calderon’s political nemesis and the self-proclaimed “legitimate president,” also screamed the same iconic phrase a little more than an hour earlier to supporters of his alternative government gathered in the Zocalo. The former Mexico City mayor also used his grito to call for the resignation of three federal Cabinet members responsible for public security matters and called on members of his petroleum defense movement to march through central Mexico City in opposition to government proposals for allowing increased private participation in the government-run oil industry.