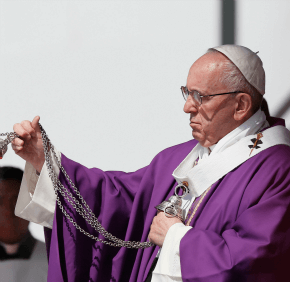 MEXICO CITY – Bishops across Mexico expressed incredulity with the escape of the country’s most notorious inmate  and said it showed the complicity of public officials with drug cartels and the depth of corruption in the country.
Drug kingpin Joaquin “El Chapo” Guzman slipped out of a maximum-security prison — for the second time in his criminal career — from the shower area of his cell through a nearly mile-long tunnel to a rural settlement.
“Mexicans should make a monument to ‘El Chapo’ because, in a single stroke, he showed the size of our corruption,” Bishop Raul Vera Lopez of Saltillo told reporters.
“It’s hard to understand an escape by a person like him from an extremely high security center if there isn’t complicity,” said Cardinal Francisco Robles Ortega of Guadalajara.
Guzman is leader of the Sinaloa Cartel, which grew into the most powerful and quite possibly profitable criminal organization as it moved drugs from the Andean countries of South America through Central America and Mexico to the United States and other countries. The cartel gained fame for its construction of tunnels to move drugs under the U.S.-Mexico border.
The cartel is so culturally and economically ingrained in Sinaloa that Guzman’s escape was greeted with “music” and “guns being fired in the air,” said Javier Valdez, founder of the Sinaloa news outlet Rio Doce. “He continued being a powerful person from his prison cell.”
Guzman was captured in Guatemala in 1993, but he was wheeled out of a Guadalajara-area prison in a laundry cart. Mexican officials captured him in Mazatlan in February 2014 and locked him up in a high-security facility 50 miles west of Mexico City — opting against extraditing him to the United States.
Mexican President Enrique Pena Nieto called the escape “outrageous.” After Guzman’s 2014 arrest, he told Univision that another escape would be “unpardonable.”
“The country’s creditability was scarce, and with these events the creditability that we do enjoy is shaken, in spite of the publicity and all of the promises that are given,” said Bishop Jose Martinez Zepeda of Irapuato. He was quoted in the newspaper Correo in his home state of Guanajuato.
“We have a crisis of creditability, justice, legality and a common effort,” the bishop added. “Criticisms are going to rain down … because (the president’s) publicity has been that, in the country, crime has calmed … and (then) there’s an escape from a high-security prison.”
Copyright (c) 2015 Catholic News Service/U.S. Conference of Catholic Bishops