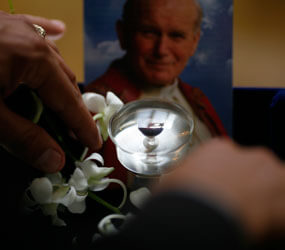 MEXICO CITY – The Mexican bishops’ conference declared a nationwide tour of relics of Blessed John Paul II a “total success” as an estimated 27 million Catholics came to venerate the items – including a vial of the late pontiff’s blood – and pray for peace in Mexico.

Bishops’ spokesman Father Manuel Corral told Catholic News Service that the tour, which concluded Dec. 15 in Mexico City, drew large crowds in each of the country’s 91 dioceses and achieved its aim of having Catholics “praying for peace” along with “encouraging people … giving them hope during a difficult time.” The turnout, he added, “was more than we had hoped for.”

The tour of Blessed John Paul’s relics came at a difficult time for Mexico as drug cartel and organized crime violence has claimed more than 40,000 lives since 2006. Some areas have experienced declines in violence over the past year, such as Ciudad Juarez, but other parts of the country, including Acapulco, have worsened.

Father Corral said a desire for ending the violence was a factor in bringing out such sizable crowds. He also credited the enduring popularity of Blessed John Paul, who visited Mexico five times during his papacy and helped pave the way for Mexico and the Vatican establishing relations after decades of estrangement. “He was a beloved man in Mexico,” Father Corral said.

Pope Benedict XVI is scheduled to make his first official trip to Mexico in the spring. Father Corral said Dec. 20 that details of the trip would be made public shortly.