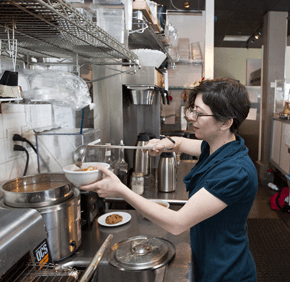 By Maria Wiering
mwiering@CatholicReview.org
The general election isn’t until November, but the primary election is June 24, with early voting June 12-19. With every seat in the Legislature up for election and one-third without an incumbent in the race, the primary election’s results will significantly shape the direction of Maryland’s lawmaking for years to come, said Mary Ellen Russell, Maryland Catholic Conference’s executive director.
The Maryland Catholic Conference, which advocates for public policy on behalf of the state’s bishops, urges Catholics not only to vote, but also to educate candidates about issues important to the local church.
This Catholic Review article focuses on fair work benefits.
Just work benefits
Mark Sine, 28, was working as a chef at a small Baltimore cafe in 2010 when he started to feel ill one morning. It was the beginning of a five-day work week, and, with no sick leave benefits, he couldn’t afford to miss a day of work, he said. Each day that week he worked, and each day he felt worse.
On his first day off, he visited a clinic and was diagnosed with mononucleosis. He missed the following two weeks of work as he recovered.
Friends and family helped him to cover rent that month, but not everyone has that kind of support, he said. If he had paid sick leave, he said, he would have taken it to diagnose and fight the disease earlier. He also wouldn’t have had to choose between his paycheck and putting customers at risk.
Along with the MCC, Sine testified this spring to support the Maryland Earned Sick and Safe Leave Act, which would require an employer to have a policy that would allow an employee to earn at least one hour of paid sick leave for every 30 hours worked. The leave could also be used for “safe leave,” to allow an employee to take time to move out of a dangerous living situation, or to care for ill dependents.
Where do candidates stand? Check out the MCC survey
See articles on other focuses of the MCC:
Financial aid to nonpublic schools
Immigration
MCC explains where the church stands on life issues
MCC fights to ensure safety-net programs receive funding
PrevNext