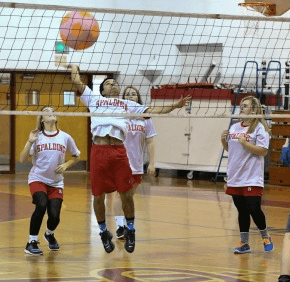 FREDERICK – It’s the monthly nutrition segment of their physical education, and the fifth-graders at St. John Regional Catholic School display a refreshing savvy.

One notes that it is best to buy fruits and vegetables in season. At another table, the talk is of Type 2 diabetes.

The class concludes with the paradox confronting young students.

“Two, three more minutes, then you have to clear up the iPad, and make sure it is plugged in and charging,” says Emily Poole, the school’s P.E. teacher, of the student’s research tool.

According to the Centers for Disease Control and Prevention, childhood obesity has more than doubled in children and quadrupled in adolescents in the last 30 years.

From smart phones to big-screen TVs, screen time is a contributor, as are larger food portions, an over-medicated society and a youth sports culture that tends to encourage the “elite” prospect rather than recreation for all.

Throughout the archdiocese, from kindergarten through grade 12, teachers such as Poole and Katherine Bailey, the chairwoman of the P.E. department at Archbishop Spalding High School in Severn, are doing something about it.

All St. John Regional Catholic students have physical education once a week, but its embrace of health and wellness isn’t restricted to its gymnasium.

The cafeteria menu includes a “Healthy Wildcat Challenge,” which in January encouraged students to “Re-think your drink this month.” Alleviating what Poole describes as the “constant stimulation” of devices such as the iPad, the school incorporates Christian meditation.

It all dovetails with the background of Poole, who converted while studying theology at Villanova University. She is both a licensed dietitian nutritionist and certified personal trainer.

“My kids get home, drop their stuff, and go outside for 15 minutes on the bike in the neighborhood,” said Poole, whose students include her two sons. “A lot of our eighth-graders are just as active. When they get to go outside, they’re moving. Running isn’t just a marathon; it’s playing soccer or basketball for 15 minutes.”

She aims to develop not just the active children, but the ones who aren’t as inclined to get up and move.

Coming off an Olympic summer, Poole began the 2016-17 year with a themed unit that included “swimming” on scooters, a parade of nations and show-and-tell from a girl whose pursuits include the shot put. The participants in one soccer lesson included students from Mount St. Mary’s Seminary in Emmitsburg.

“We introduce a lot of activities, because football or soccer might not be their thing,” Poole said. “I don’t want them to think that P.E. is only for the kid who plays basketball or lacrosse or travel volleyball. It’s about active play and having a good time. I don’t ever want anyone left out.”

For one semester, every day for 42 minutes, all 312 sophomores at Spalding change into a P.E. uniform and get moving in Fitness Mastery.

A college athlete and varsity coach,  Bailey is keenly aware that Spalding is known for its interscholastic athletics.

“We’re blessed to have (six) freshman teams,” Bailey said. “On one hand, that’s a blessing. When you have athletes, that allows you to take it to another level in (P.E.) class.

“On the other, it can be a curse. In one Fitness Mastery class, we have girls on varsity basketball with kids who’ve never played sports. That becomes a lesson in inclusion; you are only as good as your team.”

That gulf is narrowed by adapting equipment and rules.

Bailey and Derrick Lewis, a fellow P.E. teacher, concocted “speed volleyball.” Class is divided into three teams. Lose a point, and go to the side – but only for one point. When the regulation ball that can be a guided missile in a serious match is replaced with an oversized one, the game slows, rallies lengthen and laughter increases.

“We change a lot of rules, mix up the games, play with multiple balls; all to make it so anyone can succeed,” Bailey said. “They’re big fans of never- ending games.”

The final score won’t be known until decades have passed, as the goal is to make physical fitness part of their adult routine. At Spalding, P.E. complements classroom instruction that addresses addiction and mental health.

“So many studies predict that life expectancy could decrease for this generation, which would make it the first to not outlive their parents,” Bailey said. “We have become a society where we do not value exercise. That’s why, in our Fitness Mastery class, we try to make sports fun and enjoyable for all students.”